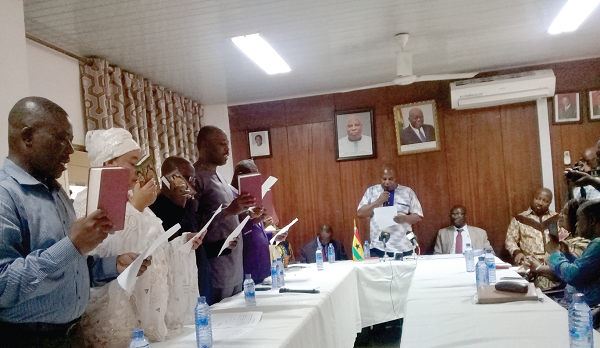 Seven out of the 10 nominated Municipal Chief Executives(MCEs) in the newly created assemblies in the Greater Accra Region have been sworn into office and charged to live up to the responsibilities, trust and the confidence reposed in them by their people.

The MCEs are to serve the people in the various communities within their areas of jurisdiction to improve on their general living conditions.

Swearing in the MCEs, the Greater Accra Regional Minister, Mr Ishmael Ashitey, urged the MCEs to promote effective and efficient local government administration and participatory democracy at the local level.

"As the chief executive of the assembly, you have become part of the local governance system. As such you have become a legislator, planner and manager of human and natural resources of your municipality. You have it as a core duty to deepen our democratic credentials, promote local economic development and at the same time promote effective and efficient local government administration and participatory democracy at the local level," he said.

Mr Ashitey implored the MCEs to, as a matter of urgency, acquaint themselves with the requisite legislative instruments governing the performance of their duties.

Mr Ashitey also made the MCEs aware that their continuous stay in office to a large extent would depend on their performance and the extent to which they adhered to the rules and regulations governing the conduct of the business of the assembly.

For his part, the MCE for Okaikoi North Municipal Assembly, Mr Boye Laryea, on behalf of the team assured the minister  of their readiness to take up their task and  live up to their mandate.

"We assure you that we are ready and  will not disgrace you and our party. We will ensure that all specified  rules and regulations are adhered to," he added.