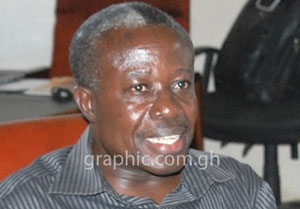 A day before being hauled before court by the National Labour Commission (NLC) for going on an illegal strike, the Ghana Medical Association (GMA) has accused the government of showing no sign of commitment to resolve their grievances.

Addressing a press conference in Accra Monday, the President of the GMA, Dr Kwabena Opoku-Adusei, said the government had demonstrated a lack of commitment to deal with doctors’ problems.

However, the Minister of Employment and Labour Relations, Nii Armah  Ashietey, in a sharp rebuttal, said the doctors were not being open with the facts.

He said after a memorandum of understanding (MoU) had been agreed to and signed by representatives of the government, organised labour, the Fair Wages and Salaries Commission (FWSC) and the Ministry of Finance and Economic Planning (MoFEP) on April 11, 2013, MoFEP had, on April 12, 2013, followed up with a letter to the Controller and Accountant-General, instructing him to go by the schedule agreed to in the payment of arrears on the market premium.

Consequently, the first quarter market premium arrears of 2012 were to be paid in May and a letter by MoFEP had been issued on April 12  to that effect.


He said the initial agitation by doctors was over their market premium, while issues on conversion differences and pensions were introduced later in their meeting to discuss the payment of market premium arrears.

Nii Ashietey said the MoU signed on April 11, 2013 had stated that "the issue of conversion difference and pensions is being dealt with by the Single Spine Post Migration Implementation Technical Committee and the government and the GMA will ensure commitment to the process".

He, therefore, wondered how the government could give a commitment letter on an issue which was still being discussed by the technical committee.

The doctors, on the other hand, accused the government of failing to turn up for several meetings convened by mediators to resolve the impasse.

They mentioned, for instance, a meeting scheduled for April 23, 2013 but which government representatives failed to turn up for.

He said the action by the government showed that it was not interested in resolving the matter and so doctors would go the full haul with the strike.

The council said the action was necessitated by the government's unwillingness to re doctors’ grievances on market premium, reduced pensions and conversion differences accruing during migration onto the Single Spine Salary Structure (SSSS).