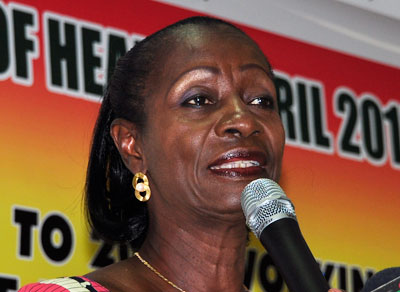 The Minister of Health, Ms Sherry Ayitey, has indicated that the future of health in the country will not be determined by the huge sums of money spent on drugs and health infrastructure but primarily the efforts to manage the environment.

She has, therefore, called for a renewed approach to collaboration to ensure that the appropriate ministries, departments and agencies (MDAs) were engaged to ensure that health issues were firmly put on their agenda.

Ms Ayitey was speaking at the development partners’ health summit in Accra yesterday.

The summit is on the theme: ‘Working together to achieve Millennium Development Goals (MDGs) 4&5 to save lives”.


According to the Health Minister, her intention was to seek more collaboration and commitment towards meeting the health objectives of the country.

She said the summit was the climax of an elaborate review exercise that had been ongoing since the beginning of the year.

The minister said within the next two years, the country would account for its performance towards attaining the targets of the MDGs.

“We have had the benefits of several reviews and missions that have identified the bottlenecks that mitigate against the country’s performance,” she said.

Ms Ayitey, therefore, called for interventions for the country to achieve the MDGs and underscored the need for stakeholders to stop flagging the challenges confronting the health sector.

That, she said, was because it was time for solutions to be found to the numerous challenges in the health sector and not excuses.

The challenges notwithstanding, she said, the country had chalked up some successes, an indication that some progress had been made so far.

For his part, the Ambassador of The Netherlands to Ghana, Mr Gerard Duijfles, who spoke on behalf of the development partners, said the health summit had provided a platform for continuous, frank and honest dialogue with all stakeholders on the successes and how to address the challenges in the health sector.

He said the holistic assessment of the health sector programme of work for the year 2012 showed neutral results, adding that although the results were better than a negative score, more actions and achievements should have been realised.