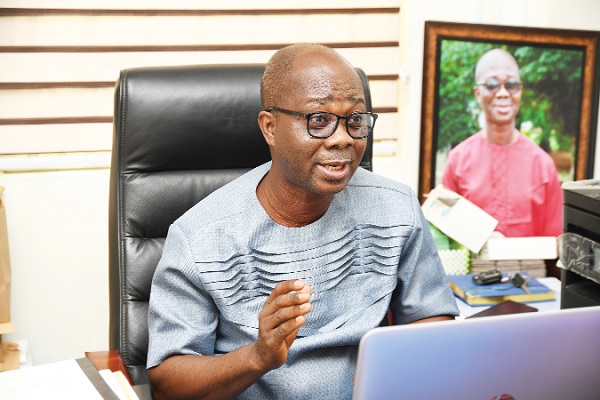 The National Ambulance Service (NAS) has assured the public that notwithstanding its operational challenges, including the inadequate supply of oxygen and fuel, its services are absolutely free.

It said the public perception that NAS demanded money or charged patrons for services rendered was not the policy.

Speaking with the Daily Graphic in Accra yesterday, the Deputy Director of NAS in charge of Operations, Mr Foster Ansong, explained that the operations of the service were funded solely by the government as a public good, and that the service did not raise any funds internally.

He said since the government’s allocation was sometimes inadequate and not released in time, the public should support the service so that it could render its services efficiently without burdening patrons.

“We sometimes appeal to patrons who request certain non-emergency services that involve long distances and are capable of supporting to do so. This is not to say we charge them.

“It is purely a favour we ask for and not a prerequisite for delivering our services,” Mr Ansong explained.

He encouraged the public to continue to call for the services of NAS freely whenever they were required and never hold back for fear of being asked to support in fuelling the ambulances.

“With or without public support, we are obliged to deliver our services, which we will keep doing happily and readily,” he said.

Commenting on a recent case in which a woman with post-delivery complications died shortly after arrival at the Cape Coast Teaching Hospital, a death which has been attributed to delay by NAS, whose driver had demanded money for fuel, Mr Ansong said the misinformation was worrying for the service.

Mr Ansong said NAS could not be blamed for the death of the nursing mother, saying it was rather deciding whether or not the baby should be transferred along with the mother which caused the delay in transporting the mother, unfortunately resulting in her death.

Narrating events leading to his wife’s death on radio, the man explained that she had successfully undergone surgery at the Holy Child Hospital in Takoradi on Tuesday, January 4, this year.

He said he had gone home to prepare food for her when he received a call from his sister-in-law that his wife had suffered a complication and was to be transferred to the Korle Bu Teaching Hospital in Accra.

“While on our way to Accra, the ambulance service officials stopped and asked me to bring GH¢600 for fuel. I had only GH¢150 on me then and they took GH¢50 for fuel. Right after buying the fuel, they returned to Takoradi, while my wife was suffering,” he said.

However, Mr Ansong said the team asked the man to pay for the fuel because he had agreed with the hospital to help fuel the ambulance, which was not adequately filled.

He said NAS’s verified report indicated that while on their way to Accra, the hospital called the ambulance to return for the baby to accompany the mother.

When the ambulance got to Takoradi, there was still division among staff as to whether or not the baby should go with the mother, which prolonged the delay, hence the inability of the woman to get to the referral facility in Accra, he said.

Mr Ansong called on health facilities to consider distances to referral facilities in very complicated emergencies because some of those cases could never survive the distance of transfer.

He said although the government was providing fuel for NAS’s operations, it had become inadequate, since the per-unit cost used in its budget had been overrun by events.

Using last year as an example, Mr Ansong said at the time of budgeting, the cost of fuel was about GH¢4.80 a litre, but by the close of the year, it had risen to GH¢6.60.

“When this happens, we become handicapped because we don’t have internally generated funds or any source of funding to top up for our expenses, coupled with the fact that releases from the government sometimes delay,” he said.

One of the ways of getting around the challenge was planning to ensure that there were no obstructions in the delivery of services, he said.

“We try to manage our fuel allocation in such a way that we will always have fuel available to respond to emergency situations,” he said.

As part of the logistics planning, Mr Ansong explained that when a case was not an emergency and could be managed in the locality but stakeholders demanded transfers to regions where NAS would spend about GH¢600 on fuel alone, it negotiated with the parties involved to support to fuel the ambulance.

He added that the absence of its own oxygen refill plants across the country was a major challenge to its operations because oxygen and fuel were the critical components of NAS.

To resolve that challenge, he said, NAS was in discussions with the government to install such facilities for the service, as it sometimes had to move cylinders from other regions to Accra for refill.

As the government alone could not deliver all health infrastructure, NAS appealed to benevolent institutions, individuals and development partners to support the service to set up its own oxygen plants across the country to boost its service delivery.

“We need oxygen in transporting almost all our cases. Most of the COVID-19 cases we transported were oxygen-dependent. If we don’t have oxygen, there will be no point in moving the ambulance,” he stressed.

Currently, he said, the service procured oxygen from the 37 Military Hospital and other sources which they paid for after a month.

“If we have one plant at least in the Northern Region, one in the Ashanti Region and another in the Greater Accra Region to take care of the northern, middle and southern belts, respectively, it will enhance our operations,” Mr Ansong added.