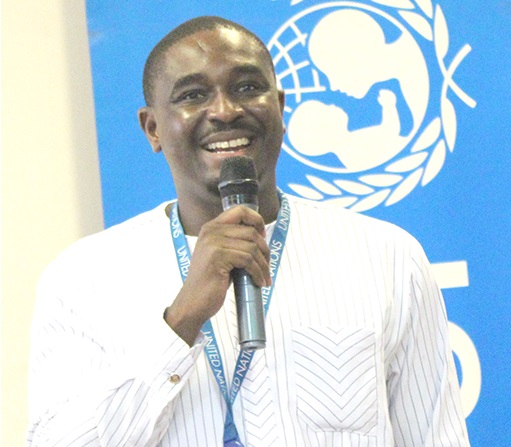 UNICEF Ghana has called on corporate organisations and employers to establish breastfeeding areas at workplaces and further make arrangements for regular breaks to enable breastfeeding employees who decide to bring their babies there to breastfeed them.

The Nutrition Officer of UNICEF Ghana, Jevaise Aballo, who made the call, said when such a facility was available at the workplace, the breastfeeding employees may even decide to come along with their caretakers to take care of the babies in the facility, while they were working or the employer may decide to employ somebody to take care of those babies in the facility while the mothers were in their offices working.

"It is done elsewhere outside the country and it is doable within our contest. Within this country, there are examples. It is very important they create space at workplaces to enable mothers to bring their babies there while working," he stated.

Mentioning the benefits of such a facility in the work place, Mr Aballo, who was speaking in an interview after a workshop on nutrition and nurturing care for media personnel, said studies had shown that employers who provided such a facility at the workplace did not see much absenteeism from employees and that meant increase output.

"Absenteeism comes at a cost to the employer. If you are able to create such a facility for mothers to breastfeed their babies, the breast milk will protect the babies from falling sick frequently which might cause the employe to absent themselves from work," he explained.

He added that knowing that their babies were close by for which reason they could check up on them from time to time helped employees to have the sound mind to work.

Furthermore, he said the percentage of children six to 23 months that received foods from at least five of eight food groups also declined from 28 per cent in 2014 to 23 per cent in 2017.

The Nutrition Officer mentioned the economic benefits of breastfeeding to the country to include prevention of 3,774 deaths of babies within the neonatal period (0-28 days) each year, saving the nation over US$5.8million and generates more than US$594 million for the economy.

In her presentation, the Greater Accra Regional Nutrition Officer of the Ghana Health Service (GHS), Faustina Vimariba Tour, said from field data, they have observed that complimentary feeding was a challenge, especially for nursing mothers in the city as they are unable to transit from exclusive to complimentary feeding.

As a result of this, she said some Ghanaian babies were eating just one type of food which would give them only one nutrient, adding that this was one of the causes of under-five anaemia.

In a welcome remark, the Chief of Communication and Advocacy of UNICEF Ghana, Eulette Ewart, said nutrition played a critical role in the development and wellbeing of children, adding that children needed to receive adequate nutrition for their continual development and transition from childhood to adulthood.

She said in terms of education, nutrition deficiencies affected the cognitive development of the child.

Earlier the UNICEF team and the media visited the Child Welfare Clinic of the Greater Accra Regional Hospital (Ridge) where they interacted with the women who had come for postnatal and antenatal clinics, as well as the health personnel who attended to them.

The Deputy Director, Nursing Services at the hospital, Scholastical Dery, mentioned some of the education they gave the women who attend the clinic as nutrition, how to take care of their babies and how to breastfeed babies properly.