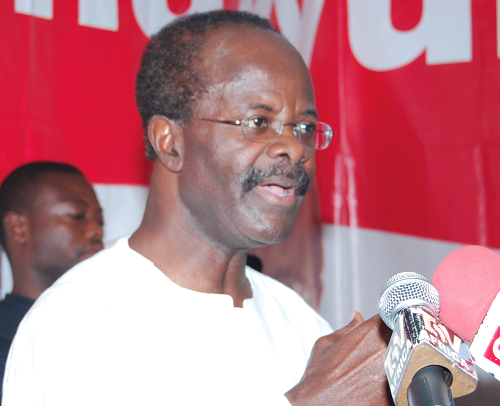 A US Federal court in Chicago, Illinois, has dismissed a complaint filed against GN Bank, its Chairman, Dr Papa Kwesi Nduom, as well as the bank’s outside directors and others.

An equity fund and securities investment company based in the United States, Birim Group LLC, filed the legal action against Dr Nduom and 18 others, including his immediate family over an alleged money laundering and financial fraud.

Birim Group sued the defendants as an assignee of two Ghanaian citizens, Ms Sekyere and Mr Braimah, who allegedly lost deposits with Ghanaian financial institutions, namely Gold Coast Fund Management and GN Bank in the sum of $52,000 dollars and $30,000 respectively.

The US company filed the suit raising claim of Racketeer Influenced and Corrupt Organisation statute and series of common law theories, including breach of contract, fraud, financial negligence against the defendants.

Ms Sekyere’s case was that she opened an account with Gold Coast Fund Management in November 2017 and made several deposits totalling $52,000.

At the conclusion of the investment term, she was to receive payment of $80,000 dollars exclusive of interest.

Braimah on the other hand alleged he deposited $30,000 at GN bank.

Birim alleged that Nduom with the aid of his family had engaged in extensive money laundering operations whereby customer deposits at financial institutions under his control, including the entities holding the two Ghanaians’ deposits were co-mingled with other funds and fraudulently transferred to other entities (including U.S. based companies) where Nduom appropriated the money for his personal endeavour.

However, in response, the defendants including Dr Nduom described the complaint as a political smear devoid of actionable allegations.

They argued that the alleged conduct was not the proper subject of a Racketeer Influenced and Corrupt Organisations (RICO) action and fell outside the court for which it must be dismissed.

The court, presided over by Thomas M. Durkin dismissed the case, noting that the complaint was adorned with extraneous information, making the allegations difficult to parse into a coherent narrative.

The court observed that although neither GN Bank, Dr Nduom nor any of the GN Bank directors were alleged to have themselves taken any action against those Ghanaian citizens, the complaint named each of them as defendants based on vague allegations of a vast international conspiracy for which the court found no supporting facts as alleged.

The court held that the complaint made under the RICO statute was “with prejudice.”

Furthermore, the court held that Birim was unable to prove the domestic injury it had suffered, noting that the allegations were not sufficient to state a RICO claim.

The two, the court said, made deals with Ghanaian financial institutions and that those institutions apparently broke those agreements and the two lost their money.

One of the Ghanaians already filed a lawsuit in Ghana, the court noted, describing it as a prudent course of action than what Birim was attempting in the case.

According to the court, those allegations were “plead in conclusory fashion and fail to allege any liability on the part of the defendants for plaintiff’s common law claims.”