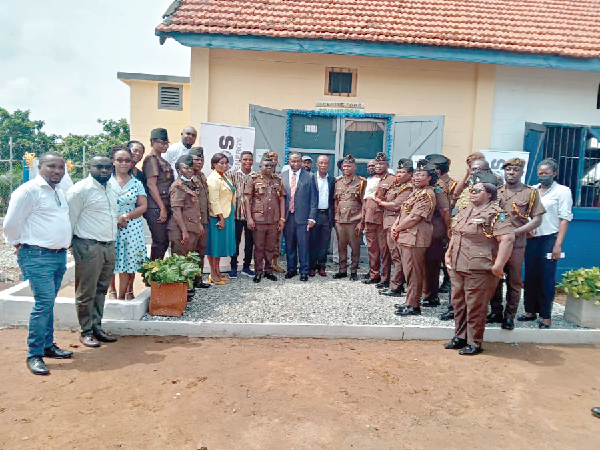 The beneficiary institutions are the James Camp Prison and Senior Correctional Centre in Accra and the Light Outreach Foundation.

The immediate objective is to give the inmates and prison officers entrepreneurial skills that could help them to generate additional incomes to support themselves.

The projects — snail farming, irrigated vegetable farming and mushroom farming — were set up on the lands of the beneficiary institutions to also create long-term job skills for their inmates.

Kosmos Energy partnered with the beneficiary institutions to construct snail and mushroom keeping structures, and prepared land and other ancillary facilities needed for the irrigated vegetable farming.

Kosmos has also trained personnel and inmates from the beneficiary institutions in farm management, packaging, record-keeping, marketing and sale of produce from the projects.

So far, under the irrigated vegetable farming, some 42 officers and 42 inmates from the James Camp Prison and Senior Correctional Centre have been trained.

Similarly, 21 people from the Light Outreach Foundation have also been trained.

At a ceremony to commission the project last Tuesday, a Senior Vice-President and Head of Ghana Business Unit of Kosmos Energy, Mr Joe Mensah, said the project was to help the beneficiary institutions to feed themselves and to sell part of their produce to generate income.

He expressed optimism that the projects would improve the food needs of the beneficiary institutions.

The Director of Prisons in charge of Agriculture, Mr Hanson Awuku, said the project would ensure an improvement in the diets of the inmates.

He encouraged the beneficiary inmates and officers to approach the project with the needed seriousness, adding that “the success story of the projects would enable Kosmos Energy to replicate it in other prison establishments”.

He said the Agriculture Unit at the Prisons Headquarters in Accra “which oversees agric operations of the service would serve as a watchdog in relation to these projects in ensuring that the project succeeds and a good report made to the financiers of the project”.

Mr Awuku commended Kosmos Energy for its thoughtfulness of making the James Camp Prison part of the project, and urged the camp’s leadership to adopt pragmatic measures after the commissioning to ensure that “this project becomes sustainable”.

The Officer-In-Charge of the James Camp Prison, Mr Raphael Tuekper, described Kosmos Energy as a key partner and ally in solving the nutritional needs of prison inmates at the camp.

A Senior Correctional Officer, Assistant Director of Prisons Millicent Owusu, said the initiative had become a great source of income generation for the camp already, as they had begun receiving orders from the public.