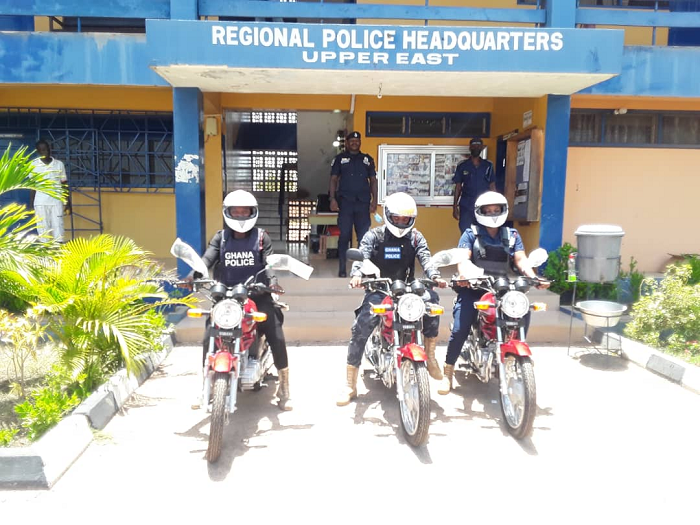 Some personnel on the new motorbikes ready for work

The motorbikes valued at GH¢31,400 would add to the existing fleet at the Police Motorbike Patrol Unit to be able to clamp down on criminals that use unregistered motorbikes to embark on robbery operations in some unmotorable parts of the Region.

Briefing Graphic Online on the motorbike patrol exercise, the Public Affairs Officer of the Regional Police Command, Assistant Superintendent of Police(ASP),Mr David Fianko-Okyere, stated that plans were advanced to operationalize the Regional Highway Patrol Unit of the service by the first of next month(June 1,2021).

He explained that personnel of the service were currently being trained to handle the Karemenga-Bolgatanga-Paga highway to curb highway robberies among other crimes.

“We want to be able match these criminals,eliminate their nefarious activities and consolidate the prevailing peace in the Region; we also want to check the rampant use of unregistered motorbikes to rob and terrorize residents," ASP Fianko-Okyere stressed.

The Upper East Regional Police Commander, Deputy Commissioner of Police (DCOP), Dr Sayibu Pabi Gariba, for his part stated that an arrangement was being put in place to organize an engagement between the Command and media practitioners in the Region to promote understanding among media practitioners regarding it’s new Operational Patrol Model and other operational programmes of the Command.

He therefore called on the media to support the Command in its efforts to combat crime in the Region.

On Friday March 19, 2021, the Upper East Regional Police Command inaugurated a new Operational Patrol Model to revitalize efforts towards combating various forms of crimes to help protect lives and properties in the Region.

The new operational strategy would also ensure that the Ghana Police Service in the region worked effectively with the other security agencies particularly the Ghana Armed Forces to deal with violent crimes that had characterized the region in recent times.

The new model would further ensure that personnel of the police command received adequate capacity building and physical training frequently to boost their confidence and sharpness levels to be able to deal effectively with security issues.

The measure was necessitated by the upsurge in armed robbery cases and other violent crimes in the region.