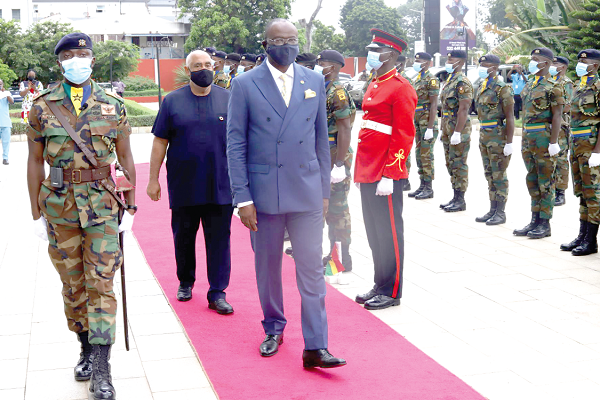 The government is exploring effective ways to invest in the youth and empower them with sustainable financing to harness their various potential for socio-economic development, a Deputy Minister of Foreign Affairs and Regional Integration, Mr Kwaku Ampratwum-Sarpong, has said.

He said this generation had witnessed the greatest number of young people in history and the youth bulge created could either represent the promise of innovative cultural and social change and economic renewal or serve as a source of social instability.

To make the best out of the youth bulge, he said the government was, through various dynamic policies, providing quality education, technical and entrepreneurial skills to accelerate job creation, promote youth empowerment and the growth of small businesses.

The deputy minister made the remarks at a flag raising ceremony in Accra yesterday to commemorate the 76th United Nations (UN) Day held on the theme: “United Nations and Ghana: working together for a sustainable and inclusive society towards recovery in post-COVID era”.

The deputy minister also inspected a parade formed by a contingent from the Ghana Army as part of the flag raising ceremony.
Mr Ampratwum-Sarpong explained that the government’s commitment to empower the youth underlined initiatives such as the Youth Employment Agency (YEA), Youth in Agriculture Programme (YIAP), National Entrepreneurship Innovation Programme (NEIP) and the Nation Builders Corps (NABCO), which constituted an integral part of the government’s flagship agenda of creating a million jobs over the next three years.
“Employment creation and youth empowerment contribute to the reduction of illegal migration and its attendant risk and attraction to terrorist activities,” Mr Ampratwum-Sarpong said.

COVID-19 shock
The deputy minister observed that due to the pandemic, the minimal progress made in the implementation of the 2030 Agenda for Sustainable Development had been reversed and the socio-economic situation of many people had worsened across the world.

In spite of the setback, Mr Ampratwum-Sarpong said the government, in partnership with the UN and other development partners, had made significant progress in laying the foundations for a transformational, peaceful and resilient society to guarantee equitable opportunities for all citizens.

He said the government had leveraged the country’s strong democratic credentials, respect for the rule of law and human rights as the adherence to good governance to manage the challenges created by the pandemic.

“Ghana’s resolve for socio-economic advancement remains undiminished, and several interventions have been rolled out by the government in response to the pandemic,” he said.

The United Nations Resident Coordinator, Mr Charles Abani, observed that Ghana was heeding the call for a more dynamic, agile, robust and nimble United Nations that responded to the urgent development needs of the country while the United Nations remained committed as ever to supporting Ghana to achieve its mission.

He said the UN country team in Ghana had initiated the process to review its existing cooperation framework, analyse its impact to determine the areas that needed attention as well as work with the government to realise the country’s dreams.

In 1947, the United Nations General Assembly declared October 24, the anniversary of the Charter of the UN, as which "shall be devoted to making known to the people of the world the aims and achievements of the United Nations and to gaining their support for" its work.