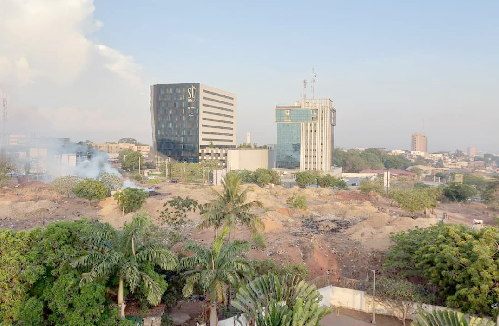 The area engulfed in smoke from the burning of the garbage

Some residents around the Ridge Hospital in Accra have appealed to health authorities to deal with the burning of refuse in the area at night, saying it posed environmental and health risks to them.

According to the residents, some refuse collectors gather the refuse from other areas, dump them behind the mortuary of the Ridge Hospital and burn them late in the night.

They said the smoke from the nuisance was having an adverse effect on them and becoming unbearable.

A resident of the area, Mr Richard Mensah, said the refuse collectors usually cart the refuse to the area during the day and burn them in the night.

He said the smoke disturbed residents and blurred the vision of motorists in the night.

A staff of the Ridge Hospital, who did not want to be named, urged the appropriate authorities to act quickly to stop the waste collectors from burning refuse in the area.

Some residents called on the police and the Sanitation Ministry to deploy a task force and guards to monitor the site and arrest culprits.

According to a report by the World Bank, the World Health Organisation estimates annual mortality from air pollution in Ghana to be more than 28,000.

Dr Kokofu said the EPA in 2015 estimated that 2,800 lives were lost due to the effects of air pollution and that the number could increase to 4,600 by 2030 if urgent action was not taken.