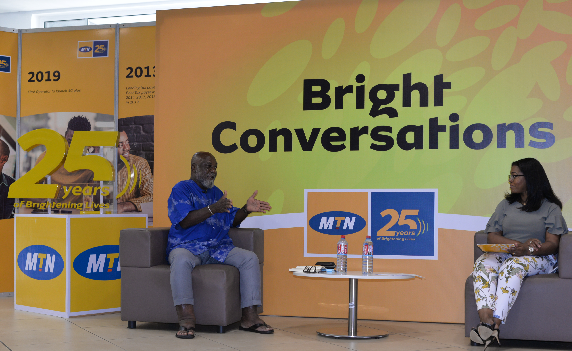 A Communication Educator and activist, Professor Kwame Karikari, has challenged state-owned media houses to free themselves from political influence.

He said the state-owned media houses have the responsibility to criticise, question policies and demand accountability from the government without fear, in order to ensure national development and promote democracy.

Prof Karakari, who is also the Board Chairman of the Graphic Communications Group Limited, said this at the Bright Conversation series, organised by MTN Ghana as part of its 25th anniversary.

The event was on the theme, “Promoting Professionalism in the era of social media and citizen journalism”.

Prof. Karikari said the 1992 constitution has mandated the media to educate and hold the government accountable, adding that the National Media Commission was established to protect them (media).

Although he admitted that majority of media practitioners in the country fear the government even in the Fourth Republic, he urged them to publish discerning information, prioritising the public interest.

Speaking on the theme, Prof. Karikari indicated that it was wrong for a well established media house to take content or information from social media and publish without authenticating the information.

“State-owned media must put themselves in a position of trust and not be corrupted by negative information from social media content," he said.

Prof. Karikari said it was expected for some of the private media outlets to demonstrate unprofessionalism due to the short period in which it was established.

“Many individuals who have established these media houses have no clue of what journalism is, so they don't care who they employ. Up to today, we have a whole mass of radio and television employees who are not doing real professional work. A lot of the unprofessionalism also has to do with the fact that the media houses are owned by politicians,” he added.

He, however, added that state-owned media houses have displayed some high professional standards compared to some private radio and television stations.

Sharing his view on the performance of the Ghanaian media, Prof Karikari said generally, the Ghanaian media has done a commendable job in helping to maintain peace and stability, stating for instance their good reportage on the COVID-19 pandemic.

He further praised them for not causing societal problems by producing content that causes ethnic differences.

The Communication Educator was, however, quick to add that much has not been done on the issue of violence and the economy.

He explained that little reportage has been made on financial investigations to educate Ghanaians against fraudsters among others, encouraging the media to delve into that aspect.

He said it was important for media owners to have adequate resources to organise programmes, conduct research and properly pay their employees.

“That is why I have advocated for a media development fund, so that small media owners can tap into it to add up to proving the professional standard of journalism in the country,” he said.

He has, however, called on the media to uphold high professional standards to maintain peace and promote growth of Ghana's development in spite of the challenges.