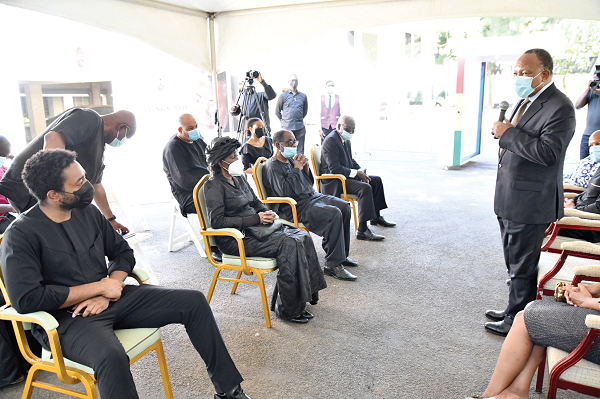 The Head of the African Union (AU) Observer Mission in Ghana to monitor the 2020 elections, Mr Kgalema Motlanthe, has idolised late former President Jerry John Rawlings, describing him as someone who contributed to the liberation struggle in South Africa.

According to him, the late former president was indeed “a true friend of the liberation struggle in South Africa”.

Mr Motlanthe, a former Vice President of South Africa, said this when he visited the Ridge residence of the late former president to commiserate with the former first lady, Nana Konadu Agyeman Rawlings, and children.

He also acted as President of South Africa between September 25, 2008 and May 9, 2009 when President Thabo Mbeki resigned.

Mr Motlanthe who was at the residence to express his deepest condolence to the family of the late Rawlings, noted that he got to know Mr Rawlings when he was serving a 10-year prison term on the Robin Island in South Africa.

He said he was inspired by positions that Rawlings adopted when he was President of Ghana, adding that it was at the end of apartheid when he got out of prison that he got to know him (Rawlings) personally.

“I felt it’s a duty to pay my respects as well as share with you our condolences and deep sense of loss,” he said.

Mr Motlanthe told the family of the late former President Rawlings that they should take solace in the fact that they were not alone in his loss, and that even from a distance there were others who shared with them in whatever they were going through.

Responding, the Head of the Funeral Planning Committee, Mr James Victor Gbeho, told the former South African president and his entourage that the state funeral for the late former president Rawlings had been slated for December 23, 2020.

He said the relationship between Ghana and South Africa dated way back, and that Ghana stood with South Africa during the apartheid period.

During the period of Rawlings’ presidency in Ghana,  Mr Gbeho said he revolutionised leadership and strengthened the relationship between ‘the haves and the haves-not.’

The late former president, he said, stood for probity, accountability and truthfulness in all that he did.

“You can imagine the effect of the departure of the giant on the wife and children of the late former president,” he said.

He said it was such visits that could help assuage the pain that the family members were going through and thanked the former South African president for commiserating with them.

Next to commiserate with the Rawlingses was the Deputy Joint Special Representative for the United Nations-African Union Hybrid Operation in Darfur, Madam Anita Kokui Gbeho.

She expressed shock at the death, stressing that she was deeply saddened by the incident.

“Not much was even heard of his illness, especially when only days before, he had buried his mother.

“His death is not only shocking, but a sad event,” Madam Gbeho said.