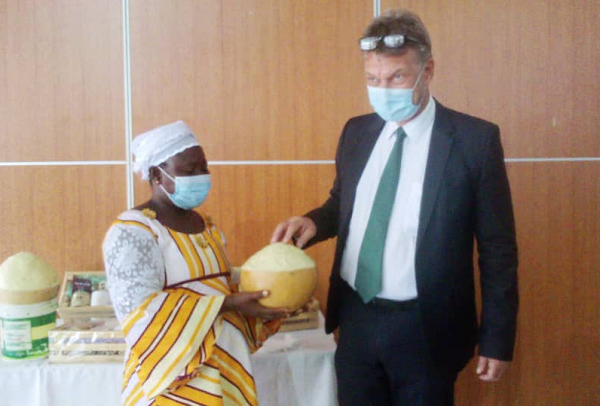 Global Shea Alliance (GSA), a non-profit association for the shea industry in partnership with the German Federal Ministry for Economic Cooperation and Development has launched a 1.15 million Euro project to help build the capacity of about 30,000 women shea collectors in Northern Ghana through training, job creation and investments.

The project—a public-private-partnership (PPP) will also facilitate private sector investment in the shea industry in Ghana and boost profitability of the sector.

Launching the initiative in Tamale, on Tuesday, March 23, 2020, the Savannah Regional Minister, Mr Saeed Muhazu Jibril said the project will increase investments in the five northern regions and also have an overall benefit on climate change and the environment.

He stated further that the initiative will equip women shea collectors and processors in adding value to the shea products which will translate into increased household income levels.

He said the government has identified shea and its related parklands, as one of the three key commodities to enable it meet its climate change objectives under the Paris Agreement.

Consequently, he said, the government has developed various programmes to support the sector, citing the Planting for Export and Rural Development (PERD) as one of the government flagship programmes aimed at increasing the production of certain crops for export including shea.

Mr Jibril added that PERD is to support rural development through increased production and export of selected crops including shea.
Partners

The GIZ Head of Network for Inclusive Economic Development, Mr Gerald Guskowski said they were happy to partner with the GSA and the private sector to boost the capacity of women shea collectors who are the backbone of the industry.

He also commended GSA in its leading role in designing and developing the strategies that drive a competitiveness and sustainable shea industry worldwide while improving the livelihoods of rural African women and their communities.

The project, he noted will develop a scalable women empowerment model that delivers sustainable income to women collectors, improve their living condition and encourage preservation of the shea parklands in Ghana.

"This objective will be achieved by improving product quality, creating new and better jobs within a cooperative framework to facilitate direct sourcing, as well as increase private investment in the value chain.

To improve product quality, the project will improve capacity of women collectors and processors to process shea, facilitate access to quality equipment such as warehouses and stoves, as well as improve the sustainability of shea parklands to ensure continued access to shea trees", he added.

The Managing Director of GSA, Mr Aaron Adu said the association was contributing a counterpart funding of about 500,000 Euros while the GIZ is also providing about the same amount to fund the two year project that will sustain and improved the incomes of the women shea collectors , secure their health and protect the shea parklands.

A representative of the Gbimsi Women's Shea Cooperative in the North East region, Ms Comfort Bugri thanked the initiators of the project saying it would go a long way to improve their lots and boost the industry.