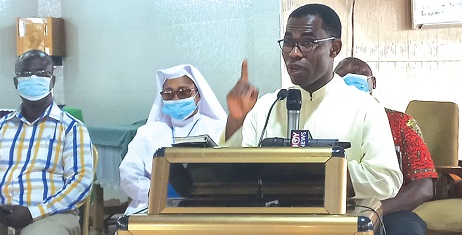 A former Ashanti Regional Director of the Ghana Education Service (GES), Joe Onyinah, has urged Christians not to see temptation as an opportunity to get closer to God.

He said temptations and trials were opportunities for Christians to display faith.

At the launch of a book titled: “Living or Leaving Temptation”, Mr Onyinah observed that more often than not, Christians would want to enjoy the benefits that came with being a Christian, but not to experience the challenges.

The book was written by the Reverend Father Louis Cecilia Adu-Poku, a priest with the Kumasi Archdiocese of the Catholic Church, who is currently studying in Florence, Italy.

Mr Onyinah said the challenges of being a Christian included temptations, and that it behooved the faithful to stand firm and not waiver so that their faith would be seen.

He thus entreated Christians not to avoid temptations but to ensure that they did not fall and abandon their faith during such moments.

He said Christians had the power to either live or leave the temptation, and urged them to make the right choice during such times.

Rev. Fr Adu-Poku said he started composing the book in 2018, but had to put it on hold until this year.

He said the book was to throw light on temptation and the challenges faced by Christians in their attempt to live a pious life.

The book, the author said, drew comparisons and lessons from Jesus’ own temptation as contained in the Bible to serve as guide.

He said he decided to launch the book during the Lent season — when Christians of some denominations went through a period of fasting and prayers — to remind the Christian faith about the challenges they could face while trying to abstain from sin and to draw closer to God.