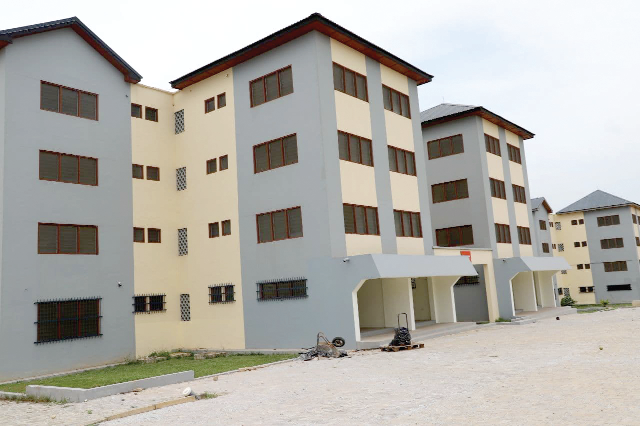 President Nana Addo Dankwa Akufo-Addo has inaugurated the Affordable Housing Project at Asokore-Mampong in the Ashanti Region, meant to provide affordable accommodation to the public.

Named Otumfuo Osei Tutu Housing Estates after the Asantehene, the 1,021 housing units were started about 13 years ago, and given life when the government worked with the Social Security and National Insurance Trust (SSNIT) to complete it, not only as part of the solution to the nation’s housing needs, but also as an investment asset for the scheme.

It is a part of the government’s housing projects around the country, with others sited at Borteyman and Kpone in the Greater Accra Region; Koforidua in the Eastern Region, Tamale in the Northern Region, and Wa in the Upper West Region.

The Affordable Housing Project is intended to provide accommodation for low and middle-income workers, and build the capacity of local contractors, among others.

At last Thursday’s ceremony, President Akufo-Addo said it was “a very good day for me” because he was able to bring finality to two projects initiated by then President John Kufuor, who formed a government of the New Patriotic Party (NPP).

President Akufo-Addo (right) cuts the tape to inaugurate the Osei Tutu II Housing Estate at Asokore-Mampong in Kumasi. With him is the Asantehene, Otumfuo Osei Tutu II (in kente) Pictures: EMMANUEL BAAH

The other project is the Boankra Inland Port, which started about 18 years ago.

The President commended the management of SSNIT, which took over the project two years ago, for an excellent job of “bringing onto the market, truly affordable houses”.

“So, as you can see, these are very reasonable prices, and they are genuinely affordable housing and the icing on the cake is, this entire estate is named after the illustrious Asantehene, whose reign has been truly remarkable: Otumfuo Osei Tutu II,” he said.

The Director General of SSNIT, Dr John Ofori-Tenkorang, said the completion of the project would bring relief to the residents of Kumasi and partly solve the housing deficit facing the country.

He said the gated community was set out in a well laid out environment, with street lights and car parks.

It also has seven fire hydrants strategically distributed, and a manager to run the facility.

In another development, the people of Foase in the Atwima Kwanwoma Municipality held a durbar in honour of the President.

At the durbar, the Chief of Foase, Nana Frimpong Appiah Ampam II, pleaded with the government to tar the roads in the town, saying they were in a deplorable state.

He also appealed to the government for support to complete some of the developmental projects, including a clinic, initiated by the traditional rulers.

Nana Ampam also released a 40-acre plot to the state to be used for training institutions, and appealed to the President to consider setting up either a nursing training college or a college of education in the area.