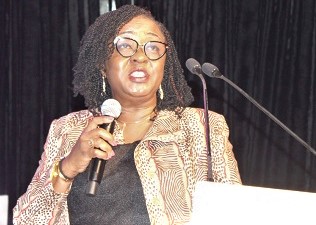 She stated that passing the bill had taken too long which had dire consequences for women when it came to ensuring a level playing field for both men and women.

The Affirmative Action Bill is meant to enact a law to address aspects of social, economic and educational imbalance in the country in accordance with Article 17(4) of the 1992 Constitution.

The bill seeks to promote a progressive increase in active participation of women in public life from a minimum of 40 per cent to 50 per cent by 2030 in line with the Sustainable Development Goals (SDGs).

Speaking at the media launch of the She Leads Project, a young women leadership initiative by Plan Ghana International, Ms Minkah-Premo explained that the passing of the bill would help address a lot of inequality challenges affecting women.

The launch, held last Tuesday in Accra, was used to discuss the creation of opportunities and an enabling environment for young women to aspire for leadership positions.

Ms Minkah-Premo said women were capable of achieving laurels in the public and private sectors.

“They (women) need to be equipped and inspired to aspire for leadership. This can be made possible by laws like the Affirmative Action (Gender Equality) Law, which will put in place programmes to ensure that men and women are given equal opportunities,” the women’s rights activist said.

She said there was enough justification for the Affirmative Action Law since it will see an increase in the number of women in leadership.

“The bill will address issues such as the marginalisation of women in public and economic life in Ghana. Again, the bill seeks to ensure that Ghana’s obligations under international human rights instruments to which it is a state party are complied with,” she said.

Ms Minkah-Premo indicated that countries such as South Africa and Rwanda were already in the lead with respect to gender equality in governance through affirmative action laws.

“There is an increase in the number of women in Parliament in these countries. Ghana that sets the pace on many critical issues has been left behind and we need the law in place before the close of 2022 to redeem our place in the comity of nations,” she said.

Ms Minkah-Premo commended organisers of the project, stressing that it was important that opportunities were created to ensure that girls and women were equipped and prepared to take up leadership positions.

“With the She Leads Project, I look forward to the opportunities it will create to enable young women to aspire for leadership,” she said.