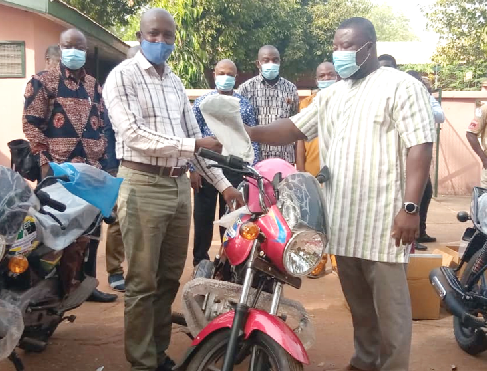 Mr. Abdul Majeeb Mahama (right) handing over a key to one of the motorbikes to Mr. Mustapha Mahama
30.5k Shares

The Ministry of Local Government and Rural Development (MLGRD) has, through its agency, the Ghana Productive Safety Net Project (GPSNP), handed over 30 motorbikes to 15 municipal and district assemblies in the Tamale Zone of the agency.

The motorbikes are meant to facilitate the effective supervision and monitoring of projects that are being implemented in the beneficiary municipalities and districts.

The GPSNP is a government intervention under the MLGRD and is being implemented in 80 municipalities and districts across the country.
The Tamale Zone covers 15 municipal and district assemblies in the Northern, Savannah and Oti regions.

The beneficiary districts under the Tamale Zone include Mion, Nanton, Saboba, Tatale-Sanguli, Zabzugu, Nanumba South, Kpandai and the Gushegu municipality, all in the Northern Region.

The rest are the Central Gonja District and the East Gonja Municipality in the Savannah Region, and the Nkwanta North, Kadjebi, Krachi Nchumuru, Krachi West and Krachi East districts in the Oti Region.

At a ceremony held in Tamale yesterday to hand over the motorbikes to the 15 municipalities and districts, the Zonal Coordinator of the Tamale Zonal Coordinating Office of the GPSNP, Mr. Samuel Amo-Nimoh, said the motorbikes were to be handled by field supervisors, so that they could effectively supervise and monitor projects that were being undertaken in the beneficiary communities.

He said the projects being implemented included small earth dams, feeder roads and climate mitigation interventions aimed at improving the living conditions of the people living in deprived communities and also eradicating poverty in the project implementation areas.

Mr. Amo-Nimoh urged the beneficiary municipalities and districts to use the motorbikes for their intended purposes in order to help achieve the aims and objectives of the project, which sought to improve the living conditions of the people and contribute to attaining Sustainable Development Goal One (SDG 1).

The SDG One aims to eradicate poverty in its extreme form by focusing not just on people living in poverty but also the services the people relied on and the social policies that eliminated poverty in society.

The Development Planning Officer of the Northern Regional Coordinating Council (NRCC), Mr. Abdul Majeeb Mahama, handed over the motorbikes to the beneficiary municipalities and districts.

The District Chief Executive (DCE) for Central Gonja, Mr. Mustapha Mahama, received the motorbikes on behalf of the 15 municipalities and assemblies and expressed his gratitude to the MLGRD.