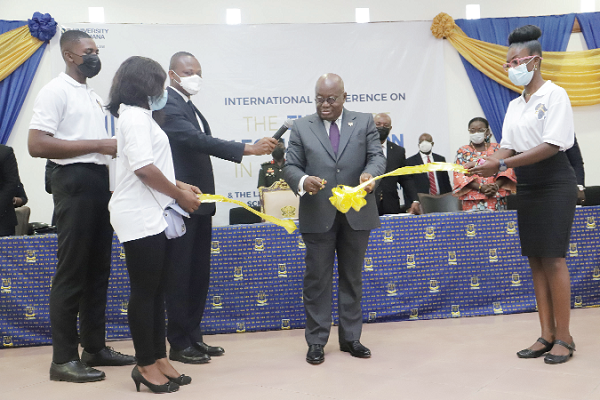 President Nana Addo Dankwa Akufo-Addo has expressed his support for the expansion of opportunities for legal education to produce more lawyers, but not at the expense of quality legal education.

In line with that, he said, he had tasked the Attorney-General and Minister of Justice to fast-track the balance of consultations on the Legal Profession Bill and lay it before the Cabinet and, ultimately, Parliament as soon as possible for enactment.

President Akufo-Addo expressed the support when he opened a four-day international conference on: “The Future of Legal Education in Ghana/Africa” in Accra yesterday.

The conference, which attracted legal brains and practitioners, judges of the superior courts, captains of industry and deans of faculties of Law from the 50 Law faculties in Ghana and heads of legal educational institutions from Africa, was used to launch the University of Ghana School of Law Endowment Fund.

President Akufo-Addo, who is a lawyer, made a personal donation of GH¢100,000 to the Endowment Fund.

“This bill aims to address comprehensively the issues of legal education in Ghana today. It must dispel the notion that the legal profession is a guild, a small club of mostly men which is difficult to penetrate,” the President said.

He was hopeful, though, that a new Legal Profession Act and the various regulations that would result from it "will bring the many issues surrounding legal education in Ghana to fruitful resolution once and for all, at least for this generation”.

While urging that the quality of training of lawyers should not be compromised, the President nevertheless reiterated his belief in opening up the opportunities in legal education.

He noted that there was the need to ensure that before anyone was licensed to practise as a lawyer, that person had a firm grip on the law, trained to have the discipline in integrity that went with the profession and be confident and able to challenge colleagues anywhere in the world.

President Akufo-Addo explained that the structures that existed when Ghana had a population of six million could not be the same for the current population of 31 million to train lawyers.

That challenge, he said, was not faced by legal education alone but other professions as well.

He said the problem faced by legal education was not only the lack of physical structures but that even the law that regulated the profession — the Legal Professional Act, passed in 1960 — could not meet current needs.

The law, he disclosed, was passed when his father, former President Edward Akufo-Addo, was at the height of his practice at the Bar and took part in authoring it about 60 years ago, adding that such a law could not be fit for purpose in 21st century Ghana.

President Akufo-Addo indicated that apart from the extra buildings that were obviously needed to accommodate more student lawyers, there was the need to ensure the availability of enough accomplished teachers to teach the Law courses.

“I don’t break any secret code, I am sure, if I say here that some of the new faculties are struggling because they do not have enough qualified teachers,” he disclosed.

The President noted that under the current legal system, it was mandatory to have a Law degree and a professional qualifying certificate to enable one to practise law, but it was also a fact that throughout the history of the legal profession, some of the brightest legal practitioners and judges did not do Law as first degrees.

“I make the point only that whatever system we set up, we must train educated lawyers, and that is what this gathering must concern itself with. How to ensure that the lawyers we train here know the Law,” he said.

President Akufo-Addo called for a sustainable legal education established to cater for the pressing needs of the growing Law student population and the expected demands of the generation unborn that would study Law.

That, he explained, would be qualitative in its operation but with a fair and balanced quantitative selection system.

The Chief Justice, Justice Kwasi Anin Yeboah, in a speech read on his behalf by a Justice of the Supreme Court, Justice Jones Dotse, said the quality of legal education should never be compromised.

In view of that, he said, comprehensive standards and checks must be put in place so that the faculties of Law offering the LL.B programme did not lower standards.

He said the institutions offering LL.B programmes would have to undergo more rigorous scrutiny before they are approved.

“The criteria must include the types of programmes, qualification of academic staff, student-teacher ratio and libraries. Once the issue of quality assurance is maintained, the faculties can be allowed to allow professional legal training to reduce the burden on the Ghana School of Law,” he said.

The Dean of the University of Ghana School of Law, Professor Raymond Atuguba, said the challenges of legal education were not new but different due to current realities.

He said it was important for all stakeholders to come together, take action and resolve the challenges of legal education, adding: “We must begin the process of reforming legal education in Ghana.”