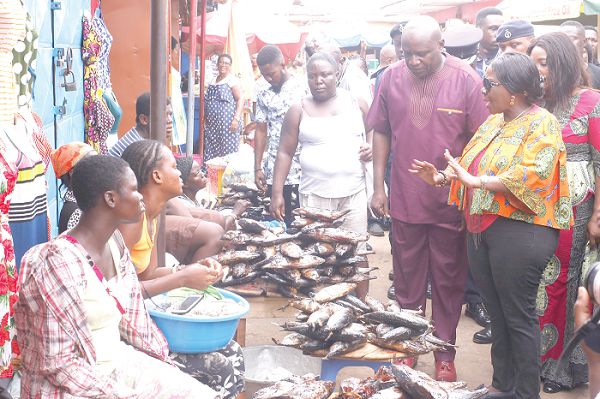 The Minister of Sanitation and Water Resources, Mrs Cecelia Abena Dapaah, has commended the Ledzokuku and the Krowor municipal assemblies in the Greater Accra Region for championing environmental cleanliness in their areas.

Mrs Dapaah noted that the two municipalities had started, what she described as, important steps to bolster the President’s vision to make Accra the cleanest city in Africa.

Those initiatives, she said, had helped to curb careless littering of the environment in the two municipalities, especially drains, markets, streets, homes, schools and the communities.

“Each municipality has its own dynamics yet they are all driving various options they have to keep their areas very clean and this is commendable,” she stated.

Mrs Dapaah, who made the commendation when she embarked on a working visit to assess the sanitation situation at Nungua and Teshie, said “With a commitment to ensure cleanliness, we have now all seen the path to take.”

She also used the occasion to educate the women on the various government-initiated programmes such as the Planting for Food and Jobs which, she said, had contributed to increased food production in the country.

She was accompanied by her deputy, Mr Patrick Yaw Boamah; the Member of Parliament (MP) for Krowor, Mrs Elizabeth Afoley Quaye, who is also the Minister of Fisheries and Aquaculture; the Chief Executive for the Krowor Municipality, Mr Joshua Nii Bortey, and the Chief Executive for Ledzokuku, Mrs Evelyn Naa Adjeley Twum-Gyamrah.

In a bid to sustain such efforts by the municipalities, she said, the Ministry of Sanitation would soon distribute 20,000 litter bins to all the metropolitan, municipal and district assemblies.

“For now, we are going through the various procurement processes and once we are done, we will give each assembly, 200 dustbins and we hope this will be a major boost to their efforts,” she stated.

She particularly encouraged all MMDAs to back the campaign to have both private and commercial vehicles to hang either material or plastic receptacles in their vehicles to induce passengers to stop littering.

“I think that every municipality should have lorry parks in their areas to have these bags. As much as we have litter bins around, we also need these small bags in our vehicles so that people can drop in waste,” she stated.