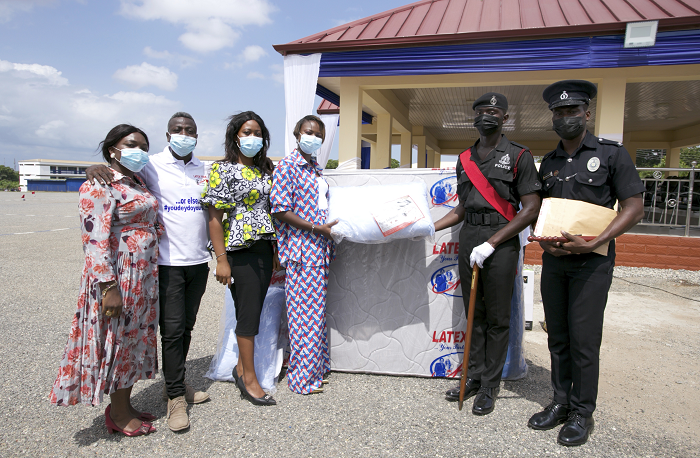 Latex Foam, the leading foam manufacturing company in Ghana and West Africa, has presented a cash prize and some products of the company to police recruit Charles Agyekum Wasiu, for emerging the best in drills at the National Police Training School in Accra.

The items were presented by the Public Relations Officer of Latex Foam, Gifty E. Appiah, at the passing-out ceremony of 425 General Recruits, which was held at the National Police Training School at Tesano in Accra on Friday, June 18, 2021.

Madam Appiah who was supported by staff of the company’s Hire Purchase Department to present the items, said the gesture was part of the company’s corporate social responsibility and also to motivate the recruits to give of their best to the country.

She said Latest Foam would continue to contribute its quota towards the development of the country, pointing out that the gesture was not the first time the company was supporting a distinguished police recruit at the National Police Training school.

Madam Appiah commended Charles Agyekum Wasiu for chalking the feat, urging him to continue to excel even after passing out from the training school.

In his address, the Director-General in charge of Administration, COP Dr George Akuffo Dampare, urged the new recruits to exhibit professionalism in the discharge of their duties.

He also admonished them to eschew all forms of activities that will tarnish the image of the police service.

For him, the passing-out ceremony only marks the beginning of the recruits’ career in the police service, encouraging them to continue to learn.

COP Dr Dampare commended the recruits for their comportment and discipline during their six-months training, particularly those that received awards for distinguishing themselves.