Kwesi Ofori bows out: After 35 years of police service 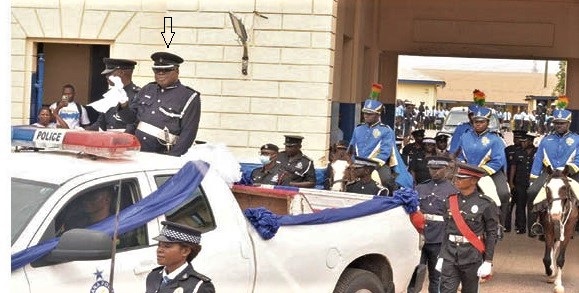 DCOP Kwesi Ofori (arrowed) being pulled out of the Police Service
30.5k Shares

The Ghana Police Service (GPS) has organised a farewell ceremony for the outgoing Director-General of the Ghana Police Public Affairs Directorate, Deputy Commissioner of Police (DCOP), Kwesi Ofori, to officially mark his retirement from the service.

He was honoured with a parade, which he inspected and was presented with a citation for his 35 years of service, dedication and commitment as a police officer.

At the ceremony, organised at the National Police Training School in Accra yesterday, ropes were tied to the front part of a police pickup vehicle in which he stood waving cheerfully at the crowd which comprised members of the service, family and friends.

He was pulled out of the premises of the National Police Training School to symbolically depict his exit from the service.
DCOP Kwesi Ofori started his police career over 35 years ago and rose through the ranks to his present rank as Deputy Commissioner of Police.

He obtained his Diploma in Public Relations from the Ghana Institute of Journalism in 1988 and his first degree and Master’s degree from the same institute.

Speaking at the event, DCOP Kwesi Ofori thanked the public, the media, members of the Ghana Police Service and his family for being instrumental in his career.

He described police personnel as people of great courage, compassion, bravery and brilliance, who have laid their lives to protect others, and said the public’s support was crucial to keep the country safe.

“The truth is that we will always do our job better when we do it side by side with you since policing is a shared responsibility.

We all have a part to play in crime fighting and the general maintenance of law and order.

“Let us support the campaign against rider indiscipline on our roads. Let us support the police in their various campaigns for the safety of everyone. And more importantly, let us eschew acts of lawlessness in all forms so that our societies can develop and grow,” he said.

He indicated that people joined the police service to work to restore calm, protect lives and safeguard humanity and not for monetary gain, power or fame.

“We join the Police Service because we want to make a difference for the communities, for families, for victims of crime, for the helpless and for the struggling souls that stumble through the very worst of their lives,” he said.

Addressing the media, he thanked them for their support over the years but charged them to be balanced in their narratives about policing.

“Inasmuch as you expect much from them, never also grow tired of talking about their everyday bravery and heroism,” he noted.

Speaking at the event, the Director of Religious Affairs of the Service, Very Rev. Fr DCOP George Arthur, urged leaders to train and groom young people during their time in active service so as not to leave a void in their organisation when they retire.

“A good leader is one whose absence is not felt in an organisation because he has groomed others. Don’t create an administrative gap as no human being is indispensable,” he said.