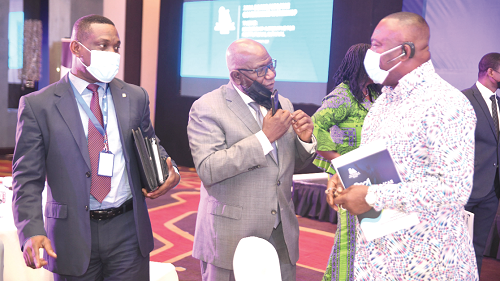 The Director-General of the State Interest and Governance Authority (SIGA), Mr Stephen Asamoah-Boateng, has asked leaders of state institutions and corporate entities to put in place progressive systems to make their organisations grow and stand the test of time.

He said that would require the current leadership to implement succession plans by identifying and training people with leadership potential to take over from them when they left the scene.

"One thing I have noticed in this country is that people get into organisations and think the organisations belong to them; they think they will never go away, but they leave eventually.

"Current leaders must learn to develop people who will take over from us and not feel threatened by the potential of other people. And those who are also being trained to take over must not overtake the leaders; they should be patient and learn," he stressed.

Speaking at this year's boards of directors, chief executive officers (CEOs) and chief audit executives (CAE) governance workshop in Accra yesterday, Mr Asamoah-Boateng said there was the urgent need to create synergies in the succession plan to sustain institutions.

The workshop, held on the theme: "Leadership: Imperative for institutional survival", was organised by the Institute of Internal Auditors, Ghana (IIAG) and meant to discuss pertinent corporate governance issues.

Mr Asamoah-Boateng urged leaders of state institutions and corporate bodies to critically examine the demographic differences of their workforce to bridge the digital gap between the older and the younger generations of workers.

He said it was important for managers of corporate institutions to marry inter-generational differences to achieve better results.

He also said the time had come for CEOs and managers of institutions to look at the future of labour by taking steps to address skill gaps that threatened a future workforce.

Mr Asamoah-Boateng further underscored the need for all managers of state institutions to implement effective performance monitoring systems to deliver on their mandate.

He called on CEOs to do away with the tendency to operate in silos and rather work together in a manner that would facilitate the sharing of ideas to address the myriad of challenges that confronted businesses and institutions.

The SIGA Boss said although there had been improvement in the performance of state enterprises over the past four years, more needed to be done to consolidate the gains made.

In her submission, the President of the IIAG, Mrs Harriet Akua Karikari, said the bitter lessons learnt from the COVID-19 pandemic were a wake-up call for business executives and corporate leaders to rethink their governance strategies.

She said the theme for the workshop was apt and timely, given that the COVID-19 pandemic had changed many corporate practices and altered organisational culture.

Going forward, she said, there was the urgent need to redefine strategies to ensure the survival of their organisations.

Mrs Karikari urged the CEOs and business executives to put the knowledge they had acquired at the workshop to practice to benefit their organisations.

A former Global Board Chair of IIA Global, Ms Jenita John, urged the participants to adopt modern technology for their organisations to withstand unpredictable times.