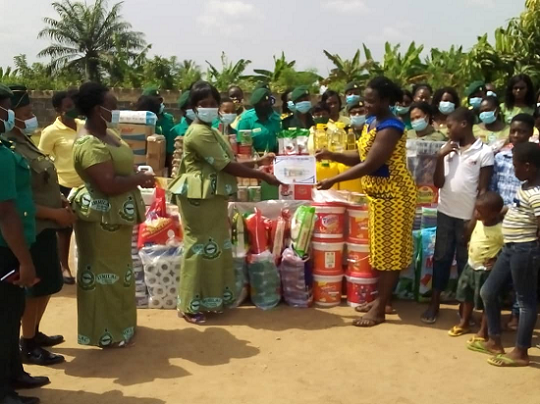 Mrs Dinah Adjei (First left), Vice-President of the Immigration Ladies Association presenting the items to Madam Edith Dzifa Ahamah, one of the caretakers of the SOS village at Akwadum
30.5k Shares

The Ladies Association (IMMILAC) of the Ghana  Immigration Service (GIS) has donated assorted items to the Christian SOS Village at Akwadum in the New Juaben North Municipality of the Eastern Region.

The items, which cost GHC3,500 included consumables such as soft drinks, bottled drinking water, rice, vegetables and others made up of used clothings, soaps and sanitary items among others, were to help in the upkeep of the children in the home during the Christmas and New Year festive season.

She said the organisation thought it wise not to keep the love to themselves, but to share it with others especially children to ensure that they enjoyed the season, which is characterised by a lot of sharing and giving.

"We are in the season of love and we cannot sit in our offices and keep the love to ourselves. We decided that we extend this love and care and that is why we have brought these items to help you  celebrate the season", she said.

"Take good care of the children and don't discriminate against them. Use the food items to feed the children. Study hard and respect your mothers and teachers in the home so as to become useful citizens of the country", Mrs Adjei advised the caretakers and the children in the home.

A caretaker and mother of the home, Madam Janet Akosua Amankwah and Madam Edith Dzifa Ahamah, who received the items, expressed gratitude to the association for its benevolence and urged others corporate organisations to emulate what they have done to ensure that the children would be taken proper care of.

They said, the home relied on support from donor organisations to keep it running as it was a private facility.

According to them, although donations came throughout the year, it wasn't enough and there was therefore the need to get more support.