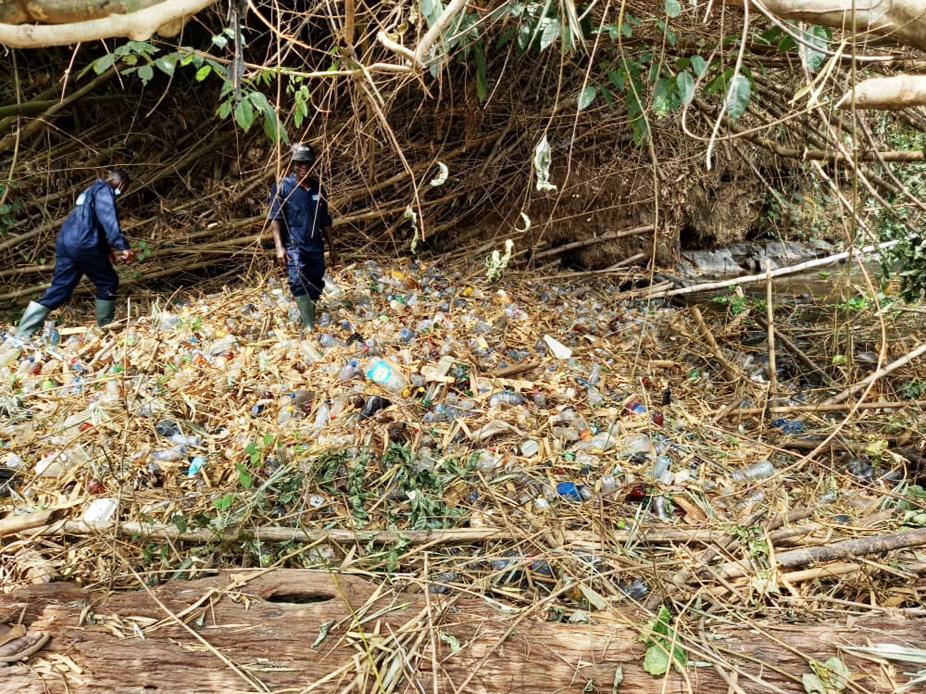 The newly inaugurated River Guards removing some debris from the river
30.5k Shares

The level of water in River Dayi in the Hohoe municipality of the Volta Region is reducing and concerned residents have urgently called for stringent measures to restore the water body to its former state.

One of the factors contributing to the drying up of the river is the pollution by plastic waste as a result of indiscriminate dumping of refuse into it.

A section of the river is so choked with plastic bottles that it can literally support human weight as the bottles now serve as a makeshift bridge across the river.

These plastics, apart from degrading the water quality with toxic compounds, could also end up harming human and animal health.

As a result of the pollution, the freshwater, which used to be home to different types of fish including Tilapia, now has a depleted fish stock.

Activities such as indiscriminate sand winning, illegal constructions, refuse dumping, farming activities and their attendant agro-chemical use all close to the river, have contributed immensely to the current state of the water source.

Also, while some residents indiscriminately channel their sewage into the river, several shade trees, along the river, have also been cut down.

Most of these activities conducted close to the river are illegal and contravene regulations that prohibit human activities within 50 metres of river banks.

The Gbi communities along the River Dayi are beginning to feel the impact of the negative activities.  There are fears that the dwindling level of the water could affect recreational activities including tourism at Torfonufe (the Talking River).

Furthermore, despite the ever-increasing population, the water treatment plant in Hohoe is unable to exceed its full capacity of 500,000 gallons of water supply a day to the municipality.

This leaves some residents with no other option but to resort to untreated water from the river. Commercial water suppliers have also been cashing in on the situation. A resident of Gbi-Wegbe, Ms Josephine Kunuya, said she spent at least GH¢100 weekly for water supply from River Dayi to augment the irregular flow from the taps.

The low quality of water from the river is not able to complement the inadequate treated water from the pump, leading to growing fears of water-borne diseases among residents.

The Assembly member for the area, Mr Patrick Dzandu, who spoke to the Daily Graphic, said the situation was dire and called for an expansion of the Hohoe treatment plant so that it could adequately serve the increasing population.

Some residents fetching water for their daily use from the river

There, however, seems to be light at the end of the tunnel to curtail the current challenges. A 30-member team, made up of youth from the various Gbi communities, have been engaged as river guards to restore the river to its former glory. The team has so far started clearing the river of debris from Lolobi and will end downstream at Gbi-Godenu.

The team will, among other measures, sieve all major drainages to prevent debris from entering the river.

The team will also safeguard the river banks to ensure an enforcement of environmental laws. A motion is, however, in force to plant 150,000 trees along the river banks in the next one year.

The Chief Director at the Ministry of Lands and Natural Resources, Prof. Patrick Agbesinayle, a champion of the initiatives, said despite the measures put in place, there was still the need for law enforcement agencies to complement the efforts of the river guards.

He expressed concern about the insanitary conditions of the river and called for concerted education on sanitation which should be complemented with the provision of logistics, including dustbins to communities in the area.

So far, the municipal assembly and the municipal office of the National Disaster Management Organisation have pledged their support to the cause, including destroying structures that have been sited close to the river, in contravention of the 50-metre rule.

The Chief of Gbi Atabu, Togbe Adzofusu IV, commended the team for their efforts so far and indicated that water was vital to the existence of life and as such, its absence led to several challenges. He said it was laudable that the challenges were receiving attention.