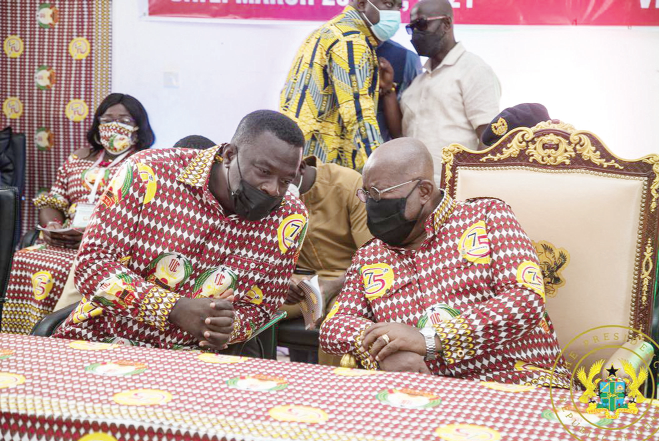 President Akufo-Addo in a tête-à-tête with Dr Yaw Baah during the congress
30.5k Shares

President Nana Addo Dankwa Akufo-Addo has allayed the fears of public sector workers that the government will freeze their salary increase.

Addressing the 11th quadrennial delegates congress of the Trades Union Congress (TUC) at Abankro in the Ejisu Municipality yesterday, the President said: “Let me reiterate, the salary increments for public sector workers have not been frozen.”

President Akufo-Addo stated this in response to a concern raised by the Secretary-General of the TUC, Dr Anthony Yaw Baah, that if the government took the advice of the Technical Advisor to the Ministry of Finance, Dr Samuel Nii Noi Ashong, that there would be no salary increment, it could lead to serious agitations on the labour front.

Last Wednesday, Dr Ashong appealed to public sector workers to be moderate in their demand for a huge rise in wages in the coming years.

Speaking at the opening of a virtual seminar on the 2021 Budget and Economic Policy Statement, Dr Ashong stated that the government did not have enough money in its coffers to meet demands for pay increment, hence the need for public sector workers to be modest in their demand going forward.

Besides, he said, the decision would provide the government with the needed fiscal space to implement the appropriate measures that could help salvage the country's economy from the ravages of the COVID-19 pandemic.

“If you look at the budget, COVID-19 is not expected to abate until the end of 2023 and we are all looking to tighten our belts for a while and so, people should not be expecting huge wage increases in the course of the next few years. This is because the government does not have enough money to support such demands,” he said.

President Akufo-Addo acknowledged that the 2021 Budget Statement  and Economy Policy of the government that had been approved by Parliament “appears to contain some difficult but very necessary causes of actions.”

“I understand the concerns being expressed especially with regard to the imposition of new taxes,” he added.

Consequently, he said, the time had come for the country to take the next step of action required for the sustained recovery of the economy following the impact of the COVID -19 pandemic.

The President, therefore, appealed to organised labour and to a larger extent, all Ghanaians “to assist the government to rebuild the public’s finances and economy.”

He said there was the need to mobilise additional resources dedicated to the new challenges confronting the country and further appealed to Ghanaians to “bear with government in these unusual and challenging times.”

President Akufo-Addo said not only did COVID-19 derail the outstanding economic progress made by the country but had also changed the world of work, thus requiring that “the labour market must also change if we are to remain competitive in the global space.”

He said it was in the collective interest of the social partners to chart “our part of progress and prosperity as we face the new wave of innovation.”

The President said the Ministry of Finance had already earmarked GH¢50 million towards the establishment of the National Unemployment Insurance Scheme to provide income support for workers without income.

He said the Ministry of Finance would set up a committee to be made up of members of the social partnership council to look at the establishment of the scheme.

In his address, Dr Baah commended the Minister of Employment and Labour Relations, Mr Ignatius Baffour-Awuah, for his hands-on approach to labour issues which he and his team at the ministry adopted, and ensured that there were very minimal agitations on the labour front.

He said the few strikes that were recorded could have been avoided if the parties involved had brought their issues to the attention of the minister at the right time, adding that “he was always available for dialogue.”

Dr Baah said with the hands-on approach, the peace in the Labour environment would be sustained.

“We can even improve on his achievements by extending the social partnership to cover all ministries so that they can also appreciate the implication of issues for national development and human security.”

He said formal and decent jobs were hard to come by, “so the informal alone has now become the main source of employment and livelihood for about 11 out of the 13 million in the workforce.”

Consequently, he said millions of Ghanaians including workers were poor, and thus expressed the view that the nation could do better for workers.

He said the government’s approach to the delivery of housing should change drastically.

“Instead of congregating large housing units to specific locations in and around the cities, we urge government to consider giving housing loans to workers and making it possible for anybody who wants to build a house, to build it wherever they want to build it.

“We also want to encourage government to build more houses so that workers can rent and own them later, “ he said.

“Our expectation is that workers within the private and public sectors will be able to own their homes at their preferred locations which they can fully pay for within 20 years of their working life,” Dr Baah added.

He also said the TUC expected the proposed national development bank to focus attention on housing for workers.