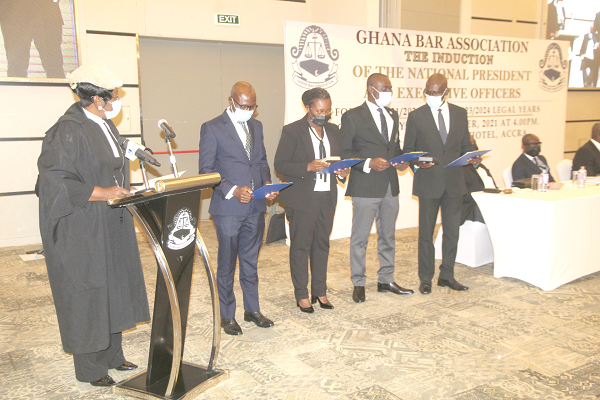 Her Lordship Sophia Rosetta Bernasko-Essah (left), a Justice of the Court of Appeal, administering the oath of secrecy to the new executive of the Ghana Bar Association. Picture: ESTHER ADJEI

The Chief Justice (CJ), Justice Kwasi Anin Yeboah, has charged the new executive of the Ghana Bar Association (GBA) to consciously guard the principles of rule of law in order to consolidate the country’s peace and to safeguard the interest of the next generation.

The Chief Justice consequently tasked the GBA leadership to regularly organise professional development programmes to help members to appreciate the ethics of the profession.

“As legal professionals, it is imperative that we guard the rule of law and the peace that our country prides itself on within the sub-region and Africa as a whole.

“We need a strong bar to assist us as partners for a common cause; it is crucial that the Bar develops and brings its members to appreciate the ethics of the profession in order not to betray the profession,” the Chief Justice said at the induction ceremony of the National President and executive officers for the next two legal years.

A Justice of the Court of Appeal, Justice Sophia Rosetta Bernasko Essah, led the GBA President, Mr Yaw Acheampong Boafo, to take the oaths of office and secrecy.

The immediate past President, Mr Anthony Forson Jnr, then handed over the symbol of office to his successor.

Mr Boafo said the GBA, under his three-year tenure, would double its advocacy works and influence policies on social justice in order to guarantee equal access to opportunities and rights for the people in the country without discrimination.

“I promise to be a unifier and be a president for all.

I may add parenthetically that my doors are open to members of the association, and I remain open to new ideas and I welcome divergent opinions and constructive criticisms, as well as useful suggestions on ways to make the association better and work for our collective interests and aspirations,” he said.

The Attorney-General and Minister of Justice, Mr Godfred Yeboah Dame, expressed reservations about the diminishing representation of women at the executive committee of the GBA.

He noted that the ethics and standards of legal practice had declined considering the output of lawyers in certain cases.

Expressing a personal experience, the A-G said: “Ethics are virtually thrown to the dogs in the dishonourable quest of some lawyers to win cases”.

He charged the new executive to drive home the point that the practice of law was not a right but a privilege, adding that “along with this privilege comes a legal obligation and moral duty to uphold the dignity of the profession and ensure that the privileged call to the bar is not abused”.

That, he said, would ensure that the profession remained noble.