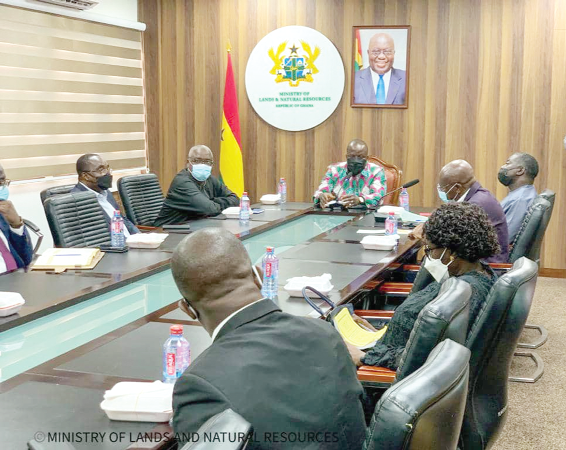 The Ministry of Lands and Natural Resources has set up a Public Lands Protection team to recover and protect all encroached state lands.

The team, which was inaugurated by the sector Minister, Mr Samuel Abu Jinapor, yesterday, has been asked to immediately take inventory of all public lands, do a baseline study of the current situation of state lands, the nature of issues associated with the lands, as well as how to protect them from illegal takeover, going forward.

Again, the team is expected to deal with matters related to compensation, pre-acquisition ownership, as well as claims and counter-claims to public land.

The inauguration of the team is in furtherance of the directive by President Nana Addo Dankwa Akufo-Addo for a ban on the use of public lands for private purposes until further notice.

The 10-member team is chaired by the Deputy Minister of Lands and Natural Resources in charge of Lands and Forestry, Mr Benito Owusu-Bio, with membership drawn from the ministry, the Lands Commission, the Attorney-General's Department, the Ghana Police Service and the Ministry of National Security.

The Lands Commission is represented by its acting Executive Secretary, Mr James Dadson, and the Director of the Land Valuation Department, Mr Benjamin Arthur, while the acting Head of the Land Use and Spatial Planning Authority (LUSPA), Mr Kwadwo Yeboah, represents the authority.

The remaining members of the team are Deputy Commissioner of Police (DCOP) George Tuffour from the National Security Ministry and the Chief Executive Officer (CEO) of AYNOK Holdings, Mr Clemence Gyato, representing the private sector.

Mr Jinapor urged the team to go all out to reclaim all encroached state lands and also protect all vested lands in the interest of the people of Ghana.

He urged it to discharge the duty bestowed on it to protect public lands with "fidelity, candour and ultimate care".

Additionally, he stressed the need for the members to take steps to curb what he described as "a systematic and consistent attempt to dissipate public lands" over the years.

"People want to sell public lands; some are stealing the lands, others are encroaching on them, and even when the lands are to be put to lawful use, they are not done in a way that satisfies public interest. All these must stop," he stressed.

The minister observed that Ghana had come to the crossroads in terms of the management of public lands and no stone should be left unturned to bring sanity into that area.

In that regard, he reiterated the fact that ministries, departments and agencies (MDAs) were no longer allowed to "deal in, grant or allocate public lands without the express authorisation of the minister on behalf of the President".

He asked members of the Public Lands Protection team to protect public lands, since that was the surest way by which the government would get the resource for agriculture, housing and other purposes.

For his part, Mr Owusu-Bio assured the minister that the team he led would work hard to protect public lands.

He said the team would work in a manner that would not set it on a collision course with the Lands Commission in terms of the discharge of their mandates.

The deputy minister called on encroachers on public lands to vacate them in their own interest.