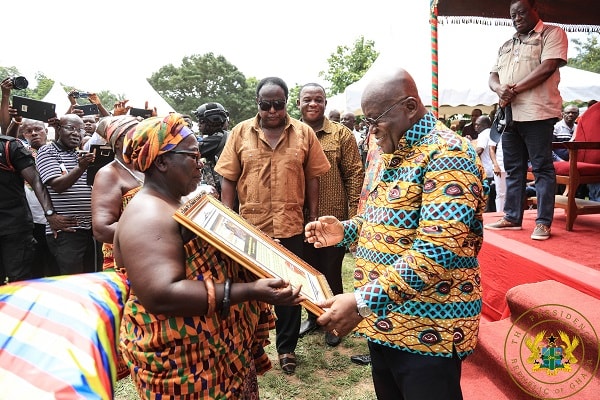 President Akufo-Addo receiving a citation from the Queenmother of Jasikan

President  Nana Addo Dankwa Akufo-Addo has assured the people of the Oti Region that work on the 54-kilometre Jasikan to Dodo Pepesu stretch of the Eastern Corridor Road will commence from July, this year.

He said $45 million had been earmarked, under the Phase One projects of the $2 billion Government of Ghana-Sinohydro Master Project Agreement, for the construction of the Jasikan to Dodo Pepesu road.

Speaking at a durbar held in his honour at Jasikan yesterday at the start of his two-day tour of the Oti Region, President Akufo-Addo recounted how, in 2016, he said he was yet to see the so-called “unprecedented infrastructural projects” touted by his predecessor, John Dramani Mahama.

“I stated, at the time, that, wherever I have been to, I never saw these so-called unprecedented infrastructural projects he (Mahama) claimed he had done. He responded by telling me that I was asleep, the reason why I hadn’t seen these projects.

“However, there has not been a single durbar across the country where I have been where the issue of the poor road network has been raised by the Chiefs and people,” the President said.

President Akufo-Addo admonished  political leaders to be always truthful to the people.

“Lies, inaccuracies and misrepresentations should not be the hallmark of political leaders. I will not say I have done the Hohoe-Jasikan-Dodo Pepeso road when, indeed, it has not been constructed. I will never say such a thing,” he told the gathering

President Akufo-Addo assured residents of Jasikan that they would not lack in development following the creation of the Oti Region.

President Akufo-Addo commended the  people of the region for remaining resolute in their quest to have a region and ensuring a peaceful referendum leading to the creation of the region.

That, he said, was an exhibition of the understanding of the concept of the rule of law by the people.

He called for support from the people for the government's policy of Ghana Beyond Aid.

The President thanked the chiefs and the people of the area for accepting the siting of the regional capital at Dambai, as against their wishes and expectations.

President Akufo-Addo was given a tumultuous welcome on arrival in the Oti Region as a show of gratitude for bringing to reality the long-cherished dream of the people to have their own region since 1954.

The Paramount chiefs of the Akpafu, Santrokofi, Lolobi, Kadjebi and Biakoye traditional areas were also at the durbar.

The tour of the Oti Region is part of the second phase of the President's working visit to the newly created regions. 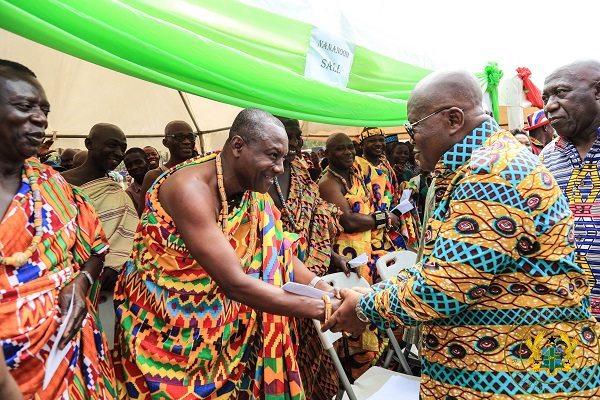 Large crowds turned up to cheer the President and his entourage when they arrived at the Bodada D/A JHS Park in Jasikan and the Ntruboman Senior High School at Brewaniase-Ntruso in the Nkwanta South District.

Some of the people, dressed in NPP colours and others in fashionable outfits, danced to music.

Students in Nkwanta held miniature Ghana flags and hailed the President as he arrived there to meet the chiefs and the people.

He was also given two Kente cloths, one for himself and the other to be delivered to the First Lady, Mrs Rebecca Akufo-Addo, as a sign of the people’s appreciation.

President Akufo-Addo described the gathering as historic, as it was his first  visit to the region since its creation.

In a welcome address, the Paramount Chief of the Jasikan Traditional Area, Nana Abram Akpanja VI, said Ghanaians, and, indeed, the people of Jasikan, were not ignorant about the numerous achievements of the government of President Akufo-Addo, within a record period of two years of being in office.

Nana Akpandja, on behalf of all the chiefs of the area, expressed the gratitude of the people to the President for giving them their own region.

He said their joy and gratitude stemmed from the fact that their request for a region began as far back as 1954, and yet successive governments failed to grant their request.

"We will forever be grateful to you and your government for demonstrating an unmatched boldness and commitment to principle, notwithstanding the strong and needless opposition against the Oti project by people who have always wished that we the people of this part of Ghana remained relatively less-developed for reasons best known to them," he added.

Nana Akpandja appealed to the President to consider siting the Oti Regional Hospital at Worawora and a University of ICT and Urban Planning at Jasikan.

That, he said, would go a long way to, among others, compensate for the leadership role, effort and expectations that the people had invested in the creation of the Oti Region.

He further appealed for the elevation of the Jasikan District to a municipal status.

Nana Akpandja also appealed to the President to consider other roads, such as the one from Jasikan-Likpe-Lolobi to Hohoe, to promote socio-economic activities in the area.

Accompanying the President were the Senior Minister, Mr Yaw Osafo-Maafo, and the Minister of Regional Reorganisation and Development, Mr Dan Botwe.

All district and municipal chief executives in the Volta and Oti regions, Members of Parliament and NPP regional  executives were present