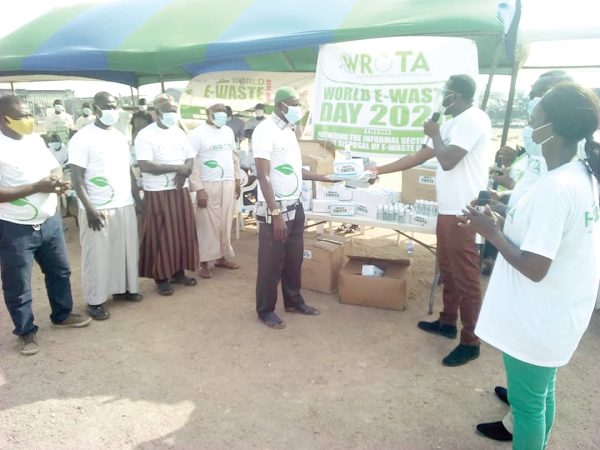 The public has been called upon to participate in adopting the best possible way of handling electronic waste (e-waste) in the country as Ghana joined the international community last Wednesday to mark International E-Waste Day.

The public was also urged to change attitudes with regard to the disposal of e-waste, including large appliances such as washing machines, refrigerators and microwaves, as well as smaller ones such as pressing irons, hair dryers and television sets.

The President of the E-Waste Round Table Association (E-WROTA), Mr Gilbert Odjidja, made the call during the commemoration of the third International E-waste Day, held at the Agbogbloshie Scrapyard in Accra.

The global event, adopted in 2017, is marked on October 14 every year, and allows the world to focus on dealing with the e-waste menace.

The Ghana event, christened: “Partnering the Informal Sector for Safe Disposal of E-Waste in Ghana”, was organised by E-WROTA in collaboration with the Greater Accra Scrap Dealers Association (GASDA).

It brought together environmentalists, members of the Environmental Services Providers Association (ESPA), scrap dealers, among other stakeholders.

Mr Odjidja said the burning of e-waste posed an environmental danger that impacted people’s health, and, therefore, posed grave threats to lives and the environment.

He, therefore, entreated the public to bring their electronic scrap components to his outfit for purchase.

The Vice-President of E-WROTA, Ms Vivian Ahiayibor, cautioned members of GASDA on the health implications of burning e-waste, and called on them to directly deal with her association, saying the group was well versed in “proper e-waste disposal” practices.

E-WROTA executive members presented items worth GH¢20,000 to GASDA to support members of the association in the fight against COVID-19.

The Secretary of GASDA, Mr Mohammed Ali, expressed appreciation for the gesture.

He said the government was doing a lot in the e-waste space to ensure public safety.

For instance, Mr Ali said, the Environmental Protection Agency (EPA) had intensified an educational campaign on the dangers of burning e-waste and other solid waste.

“I can say that due to the education, burning of waste has reduced by about 90 per cent,” he noted.

He expressed the hope that the frequent reminders on the dangers posed by burning e-waste would drastically reduce the practice.