Nawuni, a community crying for help 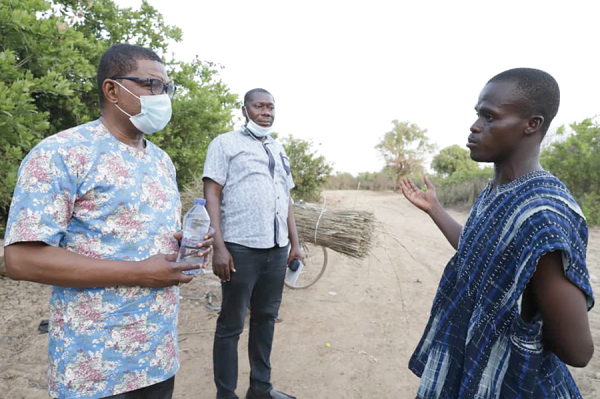 Over 100 families who had their homes destroyed in the recent floods that hit parts of the northern sector of the country in Nawuni in the Kumbungu District in the Northern Region will no longer have a place to lay their heads when basic schools reopened for the new academic year in January 2021.

The residents numbering over 200 had their buildings collapsed as a result of the flood waters that inundated the Nawuni community during a month of heavy rains in addition to water from the Bagre Dam spillage through the White Volta.

The homeless families are currently putting up in the local Roman Catholic (R/C) Primary School in the community, but they will no longer have that ‘privilege’ when basic schools finally reopen for the new academic year in January.

“We are lucky that school is not in session as a result of the COVID-19 pandemic restrictions that led to the closure of basic schools in the country in the middle of March this year. If not, we would not have a place to lay our heads,” the Assemblyman of Nawuni, Mr Alhassan Yussif, told the Daily Graphic.

Mr Yussif said during an interview with the Daily Graphic that the community members were ready to be relocated to a safer place as suggested by some officials of the National Disaster Management Organisation (NADMO) and the United Nations Development Programme (UNDP) who visited the community during the floods.

He added that they had, however, not heard anything on their evacuation which was discussed with the NADMO and UNDP officials who visited, saying “we are ready for the evacuation if it happens today”.

Meanwhile, some of the residents whose buildings collapsed have started rebuilding their homes to move in before school reopens in January. However, the challenge has been the availability of building materials such as cement and roofing sheets.

An elderly man picks up his straw transported by the canoe at Nawuni.

The assemblyman on behalf of the affected residents has appealed to benevolent organisations, corporate Ghana and spirited individuals to come to their aid with cement and roofing sheets to enable those whose homes were destroyed by the floods to reconstruct them to move out of the school block.

Another affected resident, Ms Bernice Gbeku, said this year’s situation had really shocked and terrified them due to the volume of the water that inundated the community and destroyed their homes, carrying away some people’s personal effects and belongings such as clothing, mattresses, cooking utensils, among others.

Nawuni is predominantly a fishing community with some farmers and traders and has been experiencing perennial flooding during the peak of the rainy season in northern Ghana between September and the first week in October, coupled with the annual spillage from the Bagre Dam.

But this year’s experience was exceptional, according to Mr Yussif, who shared the ordeal the residents of the area went through as a result of the massive flood that did not only collapse their homes but also consumed farmlands with food crops such as maize, rice, yam, groundnut among others.

Nawuni is about an hour and thirty minutes’ drive with public transport from Tamale, the Northern regional capital and about 30 minutes from Kumbungu, the district capital.

The road leading to Nawuni from Kumbungu is receiving attention as it has been graded but it is yet to be tarred, generating a lot of dust when moving on it and creating inconvenience for all motorists, especially motorbike riders who use that portion of the road.

The community, located about 250 metres from the White Volta, has also not been spared from excessive sand winning activities with some of the sand winners going to the extent of winning sand in the riverbed of the White Volta. This is also affecting the operations of the Ghana Water Company Limited (GWCL) that has its raw water intake point in the community.

The community has two basic schools - the local R/C primary school and a junior high school but it has no health centre and the people have to access health care at the King’s Medical Centre at Botanga, a Christian Health Association of Ghana (CHAG) facility, which is about 45 minutes’ drive from Nawuni, as a result of the bad nature of the road.

The community, however, has access to potable water and electricity.

Only this boat links Nawuni with the other island communities. INSET: Some women of the community. Pictures: EDMUND SMITH-ASANTE

The community shares boundary with some overseas communities which are located beyond the White Volta and one needs a canoe to cross to those communities from Nawuni.

The Nawuni community has one canoe which has no outboard motor affixed to it. That is the only mode the residents employ to facilitate easy and fast movement to the overseas communities and it has to be paddled while there are no life jackets on board in case of any accident.

The community is inhabited by Dagombas and Ewes who have settled in the community to do fishing as a result of the White Volta and it has a total population of over 2,000 people.
a