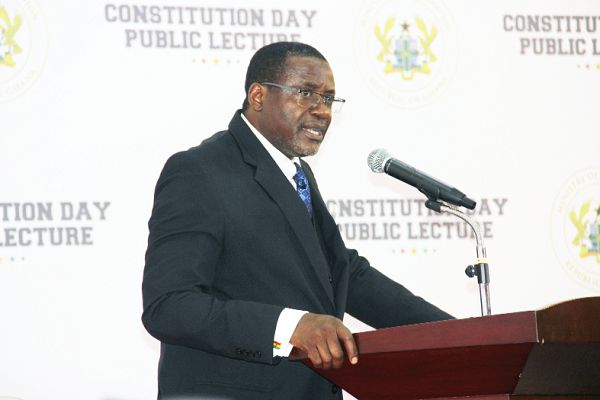 The Rector of the Ghana Institute of Public Administration (GIMPA), Professor Philip Ebow Bondzi-Simpson, has made a strong case for the scrapping of the hybrid system where Members of Parliament (MPs) combine parliamentary duties with ministerial portfolios.

"MPs should not be ministers because there are so many qualified people out there. If one decides to be an MP, one should do just that for one’s four-year tenure and do the work properly.

MPs should not combine their parliamentary role with ministerial work because, as we have clearly seen, one person cannot serve two masters well — they will serve one master and despise the other," he stressed.

Delivering the inaugural Constitution Day Lecture in Accra yesterday, Prof. Bondzi-Simpson stated that the business of Parliament required people with the competence to critically interrogate issues and international treaties, instead of those who could barely contribute to the business of the House.

"Political parties should be held responsible for the quality of MPs they present because parliamentarians must be able to interrogate critical national and international issues with competence. Some of them cannot speak out on issues and this is not helping matters," he said.

He further called for a review of the 1992 Constitution to cap the number of MPs in the country.

"The number and quality of MPs is problematic and so there is the need to look at the number of parliamentary seats allocated to each region, and this must be proportional to the population of the region,” he said.

The lecture, which was on the topic: "Constitutionalism in Ghana's Fourth Republic: Towards functional performance", was organised to mark the maiden Constitution Day, which has also been declared a holiday.

The lecture shed light on the country's 26-year democratic journey since the inception of the Fourth Republic, while putting a glorious seal of recognition on January 7 as the date for the swearing in of new Presidents for the country.

It assembled a cross-section of Ghanaians at the auditorium of the Ghana Academy of Arts and Sciences to mark the national event.

President Nana Addo Dankwa Akufo-Addo, who is widely recognised as one of the champions of constitutional democracy in the country, graced the event to demonstrate his commitment to further deepen democratic rule in the country.

Apart from the galaxy of political figures who attended the event, persons drawn from academia, civil society, the clergy, the security agencies, as well as members of the Diplomatic Corps, were part of the milestone.

The Speaker of Parliament, Prof. Mike Aaron Oquaye, Ministers of State and MPs, mainly from the ruling New Patriotic Party (NPP), were also at the event.

Prof. Bondzi-Simpson called for the provision in the Constitution on the Council of State to be scrapped or restructured to make the institution functionally relevant to current demands.

“If the Council of State is ineffectual, its establishment is a waste of time and it must be abolished or fundamentally revised or restructured,” he averred.

He also made a case for the National Development Planning Commission (NDPC) to be weaned from Executive control, so that it could craft long-term development plans for the country.

The academic don and legal luminary observed that the current arrangement where the President appointed the Chairman of the commission did not lend support to any long-term development planning.

Prof. Bondzi-Simpson stressed that inasmuch as the observation of Constitution Day was crucial to the entrenchment of constitutional rule, more needed to be done to make the provisions of the 1992 Constitution more relevant.

"It should not just be another holiday for people to rest from work but rather a moment for a sober reflection on constitutionality and how best to improve the performance of state institutions," he stressed.

A former Supreme Court judge and Chairperson of the Civil Service Council, Justice Rose Constance Owusu, who chaired the event, said the observance of January 7 as Constitution Day was a timely decision, since it would help promote constitutional democracy.

She, however, called for the strengthening of collaboration between key state and non-state actors to stop the arbitrary use of power.

"Political leaders need to be mindful of their utterances so as not to disturb the peace and stability of this country.

We have travelled the journey of constitutional democracy over the past 26 years and so it is important to do an introspection on how to move the country forward on all fronts.

We need to continue to deepen our democracy and allow the rule of law to work,” she said.