Ecological disaster stares in the face - Mangrove ecosystem in danger 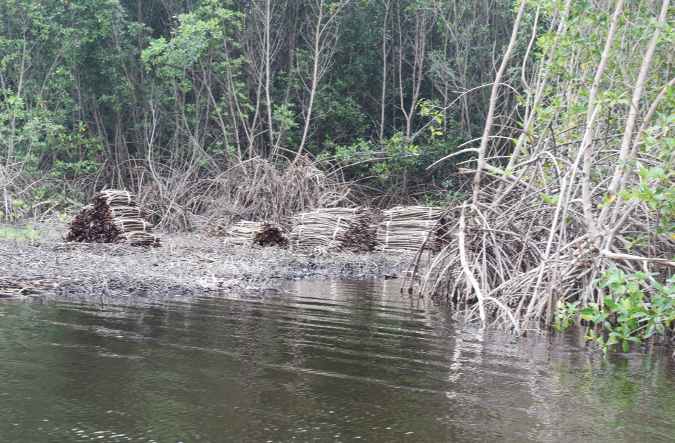 Cut mangroves along the Anyanui Creek in the Anloga area
30.5k Shares

An Ecological disaster is looming as the country’s mangrove ecosystem has come under intense danger.

This is as a result of uncontrolled exploitation, water pollution and related developments.

Experts have, therefore, warned that the development, if not checked, could plunge the country into an ecological disaster, with devastating consequences, particularly on coastal livelihoods.

They are found in almost all


Harvesting and selling of mangrove is one of the major occupations of people in areas where they are found.

Mangroves are a group of tropical plants or shrubs that grow in dense thickets or forests along tidal estuaries with exposed roots that serve as a buffer between marine and terrestrial communities, thereby protecting shorelines from damaging winds, waves and floods.

With reference to the plant and the ecosystem, mangroves, aside from helping to regenerate the fisheries stock, also serve as a source of livelihood for the residents of communities where they are present.

Although there are over 80 species of plant globally that are categorised under mangroves, there are six predominant mangrove species in the country.

However, the red mangrove, scientifically known as Rhizo-phora, and the black mangrove or Avicennia, are the commonest.

Both species have roots that help supply oxygen to the plant in muddy soils.

Mangroves can survive daily flooding and high salinity soils and this is why they are found frequently along coastlines in the tropics. 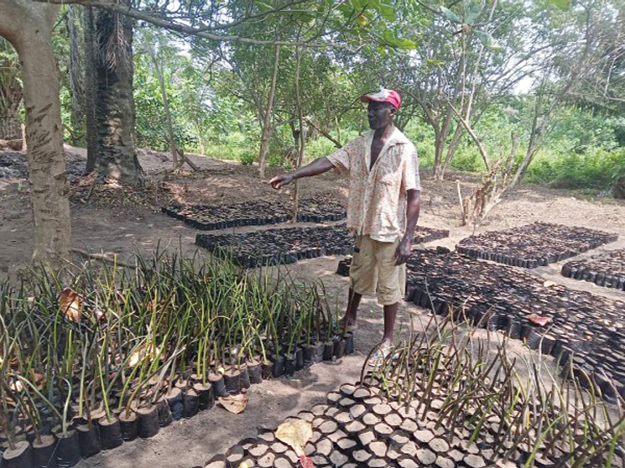 A study on mangroves conducted by the Marine and Fisheries Sciences Department of the University of Ghana in 2014 found that Ghana's mangrove cover has reduced from 137 square kilometres (km2) in 2006 to an estimated 72.4km2 as of 2014.

The shrinking mangrove, the study found, was one of the major reasons for the depleting fisheries resources.

The Operations Manager, Wetlands of the Wildlife Division of the Forestry Commission, Dickson Agyeman, in an interview with the Daily Graphic, said many mangrove areas had been destroyed to make way for residential developments while others were being harvested at an unsustainable rate for firewood.

He indicated that considering the huge economic and environmental benefits of mangrove trees, it was a criminal act to destroy them for personal gain.

Mr Agyeman stated: “Mangroves are critical economic trees that must be protected by all stakeholders, including the very people who depend on them directly for their livelihoods.”

He explained that mangroves had many uses, including serving as spawning areas for fish, habitat for some wildlife species and a buffer to prevent flooding, particularly in coastal and low lying areas, hence the need to protect them from further destruction. 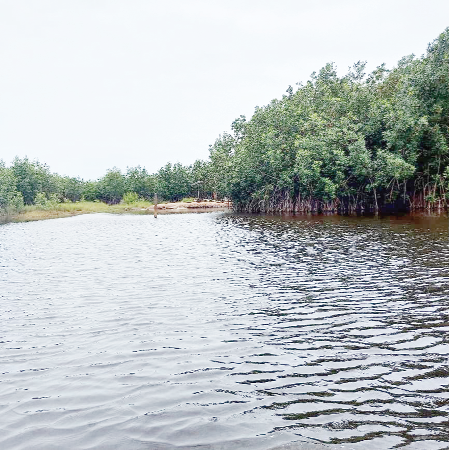 In May, 2022, the Institute for Environment and Sanitation Studies (IESS) of the University of Ghana, in a study, estimated that mangrove-related economic activities such as fuel wood for fish smoking and Akpeteshie distilling; construction of houses, harvesting of crabs, fish and black snails were significant.

It extrapolates the net return per person to fish smoking using mangrove fuel wood to be about $30 per week, while the contribution to roofing a house is estimated to be $85.

The total returns to mangrove-related harvesting to the study area comes to $340 per hectare per year.

The increase in fisheries as a result of the presence of mangroves was estimated to be $165 per hectare.
Based on these figures from the lower Volta, that is the estuary at Ada, the total value for just mangrove-related harvesting and contribution to marine fisheries is over $500 per hectare.

Using an estimated 12,000 hectares (ha.) as the area of mangrove in the country, the value of mangrove is well over $6 million per year.

The value estimation does not include all the other ecosystem services that mangroves provide such as erosion control, trapping of pollutants, provision of biomass for the food chain which would be about three times the direct benefit, which brings the annual returns from mangroves to about $20 million.

According to the IESS, the roots of the red mangrove are used with palm oil as an ointment for boils, while the extract from its bark is used for fungal infections of the skin, the treatment of diarrhoea and dysentery in children;  leprosy and sore throat.

In addition, it said the bark of the black mangrove in the powdered form, mixed with palm oil, is used for the treatment of lice, ringworm and mange, a skin disease that affects mammals, both domestic and wild.

A preparation from the Grey Mangrove leaves is also used to treat fevers, while its roots can be grounded and boiled as a cure for catarrh and its bark used in the treatment of gonorrhoea.

Latex obtained from the Grey Mangrove is also applied to cuts to stop bleeding, the IESS indicates.

Expatiating on the threat to existential threat to mangroves, Mr Agyeman explained that due to industrial and human pollution, the mangroves were not growing as expected since it depended on blackish water (water that is saltier than fresh water, but not as sea water) to grow.

He said, for instance, that many channels that supplied the needed blackish water to the mangrove sites had been blocked by some developers, causing the depletion of the mangroves in such places.

Mr Agyeman noted that mangroves also helped to regulate the climate, explaining that mangroves could absorb carbons five times higher than that of tropical upland forests.

He appealed to industries and the citizenry to desist from converting mangrove sites into human habitats as well as refraining from unsustainable harvesting of mangroves for firewood and other uses.

Aside from population pressure that leads to over-exploitation by traditional users, other factors that threaten the country’s mangroves include natural disasters, coastal pollution, poor management, urban and industrial development such as salt production, mining and tourism, as well as hydrological diversions such as the creation of dams.

A fish processor from Kedzi, Celestine Somi, 62, relies heavily on mangrove firewood to smoke and fry her fishes.

For her, the mangrove firewood was better for fish smoking than other types of fuel wood, explaining that she travelled to all communities with mangroves in the Volta Region to buy the firewood.

Ms Somi stated that the continued harvesting of the mangroves rather enable them to grow well.

A mangrove wood harvester resident in the Ankobra community in the Ellembelle District in the Western Region, Opanyin Kweku Dua, said the mangroves provided him a steady livelihood, and was not happy that their population was dwindling.

His fear is that if nothing was done, the time would soon come when there would not be a single mangrove to cut, in spite of his many years of experience in mangrove harvesting.

To forestall any such environmental catastrophe, Opanyin Dua and his colleagues, including Paul Nato Codjoe, now nurse mangroves for planting in the depleted areas.

“We have seen that the mangrove is a very important economic tree. That is why we are all interested in planting new ones,” Opanyin Dua told the Daily Graphic.

The Project Manager in charge of Coastal Landscapes and Aquatic Systems Dynamics of Hen Mpoano, a non-governmental organisation (NGO) with focus on fisheries resources, environmental and coastal management, Daniel Doku Nii Nortey,
speaking to the Daily Graphic during a recent media tour of some mangrove sites in the Western Region, organised by the International Union for Conservation of Nature (IUCN) and the Media Platform for Environmental and Climate Change (MPEG), said: “If we don’t do anything to protect the mangroves, we may lose the entire ecosystem and the livelihoods of the people who depend on it.”

He said even though the Ankobra area was not under any form of formal conservation, the community members themselves had taken it upon themselves to protect the mangroves and restore the degraded areas with support from Hen Mpoano.

Mr Nortey said Hen Mpoano was collaborating with the Wildlife Division of the Forestry Commission and the Environmental Protection Agency (EPA) to help the community members lead the charge to restore the degraded areas and protect the remaining mangroves.

He said the NGO was using a community-led approach as a tool to protect the remaining mangroves and restore the degraded areas.

“We hope that as time goes on, this area (Ankobra) will be designated as a biosphere reserve” to protect the area from destruction, he said.

For Mr Nortey, the Ankobra mangrove area contains some endangered species such as the grey parrot, colobus and Roloway monkeys, which must be protected.