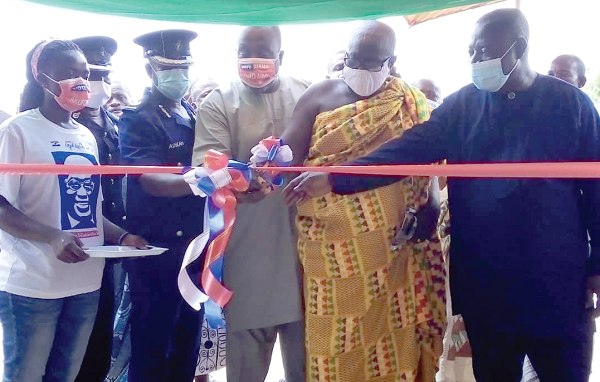 The Akim Oda Divisional Police Commander, ACP Fleance Senam Adikah, has advised police personnel stationed in the area not to go after married women since that will create enmity between them and the public.

That, according to him, would enable the public accord them respect so that the personnel would be able to co-exist peacefully with the community members.

ACP Adikah gave the advice during the inauguration of a new police station at Akyem Nkwateng in the Birim North District of the Eastern Region. The inauguration was performed by the Member of Parliament (MP) for the Abirem Constituency, Mr John Osei Frimpong, who was supported by the Chief of Akyem Nkwateng, Nana Amanie Ankrah II and the District Chief Executive for the area, Mr Remond Nana Damptey.

The facility, which cost GH¢236,126.28, was built under the supervision of the MP and the DCE through the District Assembly's Common Fund (DACF).

The facility, which has separate cells for male and female, is equipped with sanitary facilities and it will serve Akyem Nkwateng and its surrounding communities which include Kuntenase, Dodoworaso, Akumafitaa, Abohemaa, Asuabena, Botwe and Asoase among other communities.

Addressing the chiefs and the people of the area, the Akim Oda Divisional Police Commander said it was important for police personnel to deepen their relationship and mutual trust between the police and the community members.
Such relationship ACP Adikah stated was crucial for effective policing and public safety.

He said the new police station would augment the police's fight against unlawful acts and ensure sanity in the community.

According to him, the police administration would play its role to ensure that the peace and security of the country currently prevailing would not be compromised.