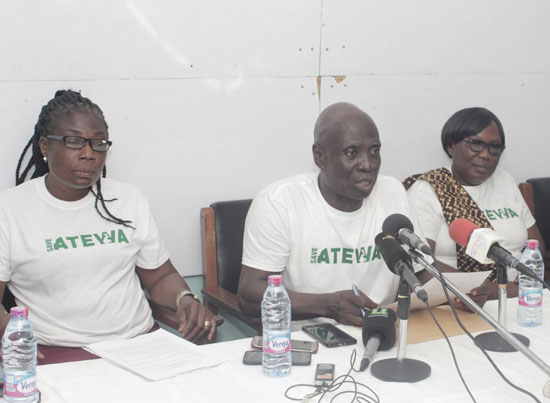 The Concerned Citizens of Atewa Landscape (CCAL) has raised the alarm over a resurgence of illegal mining by foreigners in the Atewa Forest months after the ban on small-scale mining was lifted in the country.

“They may not be in plain sight, but that doesn’t mean that mining is not happening. The illegal miners are now hiding in the thick of the forest reserve and that is why the rivers are not clearing up,” the group said in Accra.

At a press conference in Accra to mark World Water Day, the Public Relations Officer of the group, Mr Oteng Adjei, claimed there were still some illegal mining activities going on in that area and other forest reserves.

He said the group would continue to resist attempts to mine bauxite in Atewa, which provides water for more than five million people.

He, however, said the group was not surprised by the return of the illegal miners, mainly because the structures set up by the government to curtail the wanton destruction of the environment were not inclusive.

“We are particularly concerned that the District Committees on Illegal Mining (DCIM), which have been inaugurated in most MMDAs, do not include representation from the communities or from civil society groups. There is also a clear absence of women representation on these committees. This lack of inclusiveness is a major flaw that is undermining the committees’ effectiveness,” Mr Adjei added.

The CCAL began its campaign against mining, particularly bauxite in the Atewa forest, in March 2017 to preserve the forest reserve which is a source of water for three major rivers - Densu, Ayensu, Birim - and scores of minor ones.

On an occasion Ghana joined the rest of the world to celebrate World Water Day amid water scarcity in some parts of the country, including Accra, Mr Adjei observed that “the challenges of water scarcity will get worse if we do not take action today. We do not have to wait for us to get to the point of water shortage before we act”.

“How can the forest cover of the source of the River Densu in the Atewa Forest be completely destroyed by mining, while trees are planted downstream at the Weija head works ostensibly to protect the same River Densu?” he asked.

On the Ghana Integrated Aluminium Development Corporation (GIADEC), Mr Adjei applauded the government for setting up the board to attain an integrated bauxite development goals, adding that while the group was not against bauxite mining elsewhere, there was much to lose from mining bauxite in the Atewa Forest Reserve.

Mr Adjei further stated that the exclusion of key representations from the Environmental Protection Agency (EPA) and civil society representation would not augur well for accountability and transparency as bauxite industries anywhere in the world were inherently damaging to the environment throughout the process that included mine site preparation, mining, haulage, processing, refining and other downstream activities.