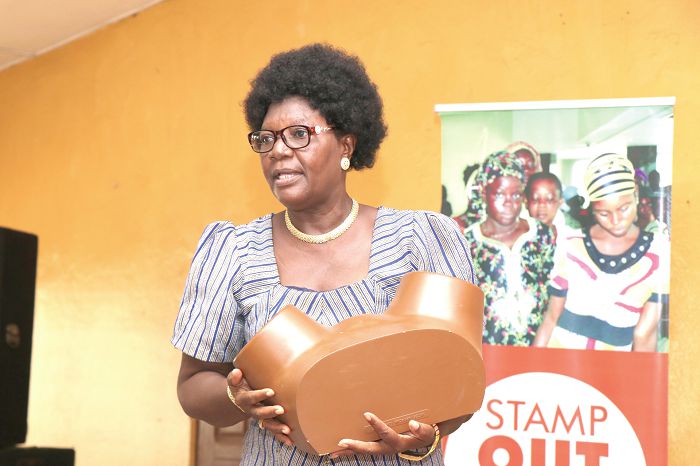 Flashback: Mrs Gertrude Eunice Maasodong, President of the Ghana Association of Women Welfare (GAWW), making a presentation on the risks of FGM at a public forum

Today, Ghana is joining the international community to commemorate International Day of Zero Tolerance for Female Genital Mutilation (FGM) to create awareness of the inhumane act.

Although FGM is declining, most of the countries where it is prevalent are also experiencing a high rate of population growth – and this implies that the number of girls who undergo FGM will continue to grow if the practice continues at its current levels.

Other risks of FGM include keloids, obstetric complications, perinatal risks, reduction of sexual quality, psychological consequences among other things.

Many women have undergone FGM in Ghana and many more women and girls are at risk every year. The majority of girls are cut before they turn 15.

In Ghana, FGM is prevalent in the northern part of the country with higher prevalent rates among different districts and communities. It is hypothesised that the higher prevalence of FGM in northern Ghana resulted from the mixture of the people and culture of northern Ghana with those of the neighbouring countries of Mali, Togo and Burkina Faso, where the practice is more common.

In 1994, the government outlawed female circumcision following a crusade led by a former First Lady, Mrs Nana Konadu Agyeman Rawlings, and the Ghana Association of Women Welfare (GAWW) which succeeded in having the Criminal Code, 1960 (Act 29) amended to include the practice of FGM.

In spite of this development, the deeply ingrained practice still goes on, with the highest incidence in the Bawku Municipality and the Pusiga District of the Upper East Region.

“In every society where it is practised, FGM is a manifestation of deeply entrenched gender inequality. It persists for many reasons but no matter the reason, we have to as a country abandon this inhumane practice,” he emphasised.

It is for this reason, he said, that UNFPA Ghana continued to accelerate action to eliminate FGM in Ghana, ensuring the rights and dignity of all women and girls were protected.

Mr Ojuolape said this year’s International Zero Tolerance Day for FGM would serve as an avenue to assess progress made in the fight against ending the practice and accelerating efforts moving forward.

It will focus on mobilising youth around the elimination of harmful practices, including FGM, on the theme: "Unleashing Youth Power: One decade of accelerating actions for zero female genital mutilation”.

A stakeholder’s engagement is scheduled to take place today in Pusiga, which is one of the epicentres of the practice in Ghana.

Traditional rulers, religious heads, FGM executors, students, FGM survivors and young people will participate in the engagement which aims to increase the capacity of policy and decision to tackle FGM, dispel myths and misconceptions about the practice and enable young people, community-based civil society organisations and faith-based organisations to be key actors in tackling FGM among others.

At the end of the event, the stakeholders are expected to renew their commitment towards ending FGM by reviewing progress made and developing action plans.