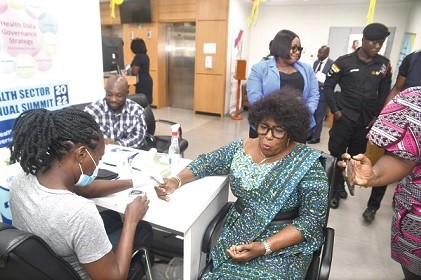 Tina Mensah, Deputy Minister of Health, being tested for blood sugar at the commemoration of World Diabetes Day in Accra
30.5k Shares

About 200,000 cases of diabetes are diagnosed annually, including children who report to health facilities in the country.

According to the acting Programmes Manager, Non-Communicable Diseases (NCDs) of the Ministry of Health, Dr Efua Commeh, the prevalence rate was between 2.6 and nine per cent of the population.

“Averagely, we have almost 800 children in total who are diagnosed with the disease, so we are now running clinics for children with diabetes who are put on insulin. However, there are a lot more people across the country who have not been captured,” she said.

Dr Commeh was speaking at the commemoration of this year’s World Diabetes Day in Accra yesterday[November 14, 2022].

The commemoration, on the theme: “Access to diabetes care”, was aimed at raising awareness of the growing burden of the disease and how to strategise to prevent and manage the threat.


Dr Commeh advised people to constantly check their blood sugar levels to prevent surprises of being diagnosed with NCDs, especially diabetes, which she said was preventable when detected early.

According to the acting manager, diabetes was a chronic metabolic disease typically characterised by high sugar in the blood which could lead to blindness, amputation and heart disease, with risk factors, especially for people 45 years and above.

Those susceptible to the disease included people whose parents or siblings had the disease, unhealthy lifestyles, physical inactivity and history of gestational diabetes, she explained.

Dr Commeh attributed the high number of cases to the abuse of fast food in the system for which some people had developed a taste.
“We can only continue to educate the public on diabetes to change the trend; it is no longer a disease for the elderly because many young people are now being diagnosed of the disease,” she said.

A Deputy Minister of Health, Tina Mensah, said population growth, coupled with increasing sedentary lifestyles, had contributed to the rising numbers in diabetes cases in the country.

She called for more stakeholder engagement to stem the tide, saying: “Our experiences with the COVID-19 pandemic have shown how far we can go with strong collaborative efforts.”

The government, she said, had placed NCDs on the front burner by making them cardinal issues for discussion at an international strategic dialogue co-hosted by Ghana, Norway and the WHO.

In a speech read on his behalf, the WHO Representative in Ghana, Dr Francis Kasolo, said diabetes mellitus took the lives of 416,000 people in Africa last year.

He also said 24 million adults were currently living with diabetes, with the number projected to increase by 129 per cent (55 million people) by 2045.

“Today, as we mark World Diabetes Day, I want to take this opportunity to appeal to governments of member states to prioritise investment in essential products, such as insulin, glucometers and test strips.

“This is critical to ensure equitable accessibility for every one living with diabetes, no matter where on the continent he or she is,” he said.