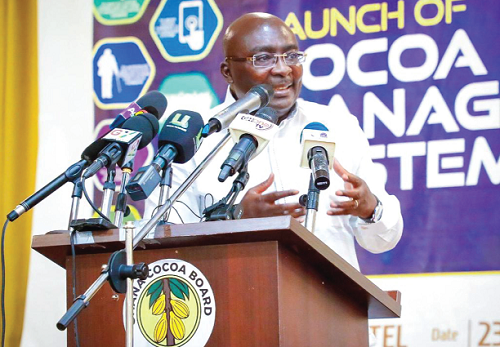 The Ghana Cocoa Board (COCOBOD) has capitalised on the digitisation agenda of the government to come up with a new project which will create a database for the cocoa sector of the country.

The Cocoa Management System (CMS) will capture the biometric information of the farmer, the land holding the farms and information on conditions of the farms, including the soil properties.

It will also take into consideration the weather, land tenure systems and address the question of inter and intra generational cocoa production to assist in the effective management, planning and implementation of policies and programmes for the cocoa sector.

The CMS, which is expected to build a database of all cocoa farmers in the entire country, as well as all cocoa transactions, begins with a sensitisation programme for the stakeholders and will be followed by data collection in two weeks time.

The Vice-President, Dr Mahamudu Bawumia, who launched the system in Accra yesterday, described the steps taken by the board and management of COCOBOD as a landmark development which was part of the transformational efforts by the leadership of the COCOBOD within the last four years.

Throwing more light on the broad digitisation programme embarked upon by the government since coming into office, Dr Bawumia said the objective was to build on the information and communications technology (ICT) to quickly transform society.

He reiterated that the introduction of the digital address system, the national identification (ID) cards, as well as the introduction of the mobile money interoperability and a host of other projects such as the paperless system at the ports, and the digitisation of the Passport and the Driver and Vehicle Licensing Authority (DVLA) offices were all part of the measures geared towards building the data and transforming the economy.

“So for the first time every programme, every policy intervention plan and projection, every infrastructural development needed in cocoa growing areas will be based on verified data.

“So the Cocoa Management System is not only in line with the government’s digital transformation agenda but will also bring enormous benefits to stakeholders in the cocoa industry, especially the farmers,” Dr Bawumia emphasised.

Despite the enormous achievements made by the country in the digital sector, the Vice-President said the cocoa sector, which accounted for about 2.5 per cent of the country’s gross domestic product (GDP) and about 25 per cent of the foreign exchange earnings, still paid up to GH¢15 billion in cash every year to cocoa farmers and other stakeholders.

Citing the recent spate of armed robbery attacks on purchasing clerks and calls for greater transparency and visibility in the cocoa supply chain to buttress his assertion, Dr Bawumia said it was imperative that the sector embarked on such a laudable journey of digitising the cocoa industry.

Vice-President Bawumia called on the leadership of COCOBOD to build an in-house capacity to manage the system to ensure ownership and sustainability, and advised all farmers to cooperate with the board in the process.

The Chief Executive Officer (CEO) of COCOBOD, Mr Joseph Boahen Aidoo, enumerated a number of challenges in the cocoa industry, but said the technological interventions of the government through the use of motorised pruners and slashers and the modern ways of farming had been resolved some of the challenges.

He said without facts and figures no amount of explanation convinced the western world on the issue of deforestation and child labour, which the cocoa sector had been tagged with.

He, therefore, expressed the hope that the new system would help empower the sector in dealing with those issues.

A Deputy Minister of Food and Agriculture, Mr George Oduro, for his part, said digitisation of agriculture had become a necessity the world over because it had the potential to revolutionise the operations of smallholder farming in Ghana and beyond.

He said the Agriculture Ministry, as part of its digitisation drive, had already commenced the registration of farmers who were participating in the subsidised fertiliser programme under the Planting for Food and Jobs initiative.

That, he said, would create a database which would provide a blueprint to aid the implementation of the programme.