Youth chase out IGP and team from Asawase peace mediation 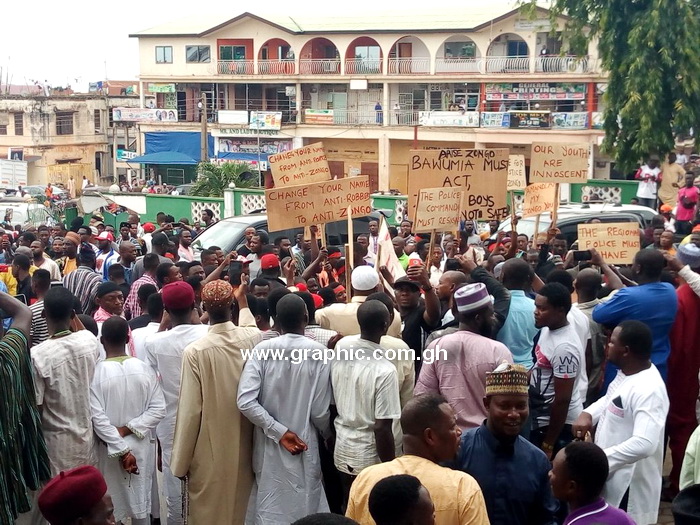 A planned meeting between the Inspector General of Police, David Asante-Apeatu, and the youth of Asawase at the Central Mosque in Kumasi Friday was botched after the angry youth engaged the police in a showdown chasing them with all kinds of missiles.

The regional police command responded with equal measure, firing a number of canisters of teargas and warning shots as people including journalists ran for cover.

The IGP, the Inner City and Zongo Development Minister, Abubakar Saddique, the Minister of Information, Mustapha Hamid and other high-powered government delegation sent to mediate the furore that has trailed the killings of seven Asawase and Aboabo youth, had to recoil and move to the Regional Coordinating Council.

The Muslims among the government delegation had joined hands with the youth to offer the Friday Juma prayers, but the scenario changed moments they had stepped out of the prayer session.

The placard-bearing youth including women then went on the rampage pelting the policemen with stones and other implements.

The police initially held back but after an incessant attack and the massing up of residents, the command re-enforced with more men, spraying hot water on the youth to disperse them.

But the youth will not budge, facing off with the police as the IGP and his men entourage were whisked into their official vehicles and exiting through the back door of the conference room.

Graphic Online later leant that the IGP and his team partook in the regional security council meeting at the Regional Coordinating Council where a committee was expected to be formed to investigate the matter.

Last Thursday, the Asawase youth burnt lorry tyres, attacked a policeman and injured three journalists while protesting the killing of the seven.

The leadership of the community has condemned the attack on the security forces and called for calm.

The Ashanti regional Police command claim the seven whose bodies have since been deposited at the Komfo Anokye Teaching Hospital (KATH) were killed in a shootout but residents say the victims are not armed robbers.