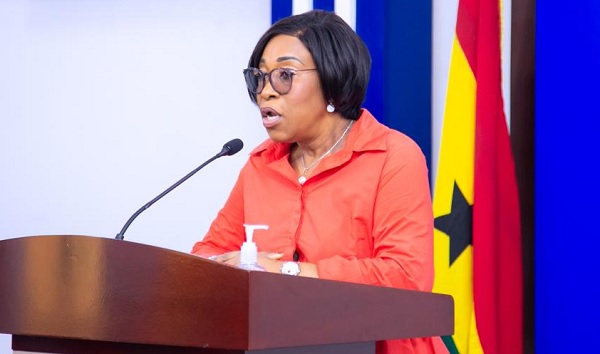 Ghana has called on Russia to withdraw and end the ongoing invasion of Ukraine.

It has also encouraged dialogue and peaceful resolution of differences between Russia and the other parties.

At a press conference in Accra on the security situation in Ukraine and the safety of Ghanaians in that country, the Minister of Foreign Affairs and Regional Integration, Shirley Ayorkor Botchwey, said Russia bore responsibility for the security and safety of Ghanaian citizens and, therefore, called on its leadership to respect humanitarian law.

“The ongoing military operations have put the lives of our compatriots in danger. The Government of Ghana remains concerned for the safety and security of our people currently in Ukraine.

“Ghana will continue to condemn, unreservedly, this unprovoked attack on the sovereignty and territorial integrity of a United Nations member state,” she said.

Recalling efforts made prior to the attack, Ms Botchwey said, Ghana, in its capacity as a non-permanent member of the United Nations Security Council, had supported calls and efforts to dissuade the Russian Federation from using force to address what Russia had described as its security concerns related to NATO expansion.

She said the UN had also warned Russia of the humanitarian consequences of any conflict and encouraged dialogue and peaceful resolution of the differences between it and the other parties.

“Like the rest of the world, we accepted the word of Russia that it did not intend to attack Ukraine. On February 24, 2022, however, we were stunned by news of the bombardment and invasion of Ukraine by the Russian Federation.”

She said hundreds of lives had been lost through bombardments since the Russian Federation and Belarus started military operations in Ukraine, adding that normal life in Ukraine had also been disrupted for the rest of its citizens, including Ghanaians living in Ukraine.

Mentioning Ghana’s interest in Ukraine, Ms Botchwey said relations between the two countries had been steady, and that in 2021, the Government of Ghana granted approval to the government of Ukraine to establish a resident diplomatic mission in Ghana, in accordance with Article Two of the Vienna Convention on Diplomatic Relations of 1961.

“Economic and trade exports between Ghana and Ukraine have been quite encouraging, as major exports from Ghana include manganese, aluminium ore and cocoa powder, whereas major imports to Ghana from Ukraine include hot-rolled iron bars, raw iron bars and cold-rolled iron. Practical steps were underway to further enhance our relations. However, the current crisis is bound to affect, for now, any meaningful strategic outcomes,” she said.

The Foreign and Regional Integration Minister further mentioned efforts being made by the government to evacuate Ghanaians resident in Ukraine.

She said about 460 students had so far left Ukraine, en route to Poland, Hungary, Romania, Slovakia and the Czech Republic, and that they would be received by officials of the country’s diplomatic missions, honorary consuls and officials of the Ghana Students Associations in those countries.

While there had been tension between Russia and Ukraine, a former Soviet Republic, for a long time, the situation started getting out of control in early 2021 when the Ukrainian President, Volodymyr Zelenskyy, urged US President Joe Biden to let Ukraine join NATO.

That angered Russia, which started sending troops near its border with Ukraine for "training exercises".

In December 2021, the Russian administration released a list of demands on Western countries, one of which was a legally binding guarantee that NATO would not expand any further to the east.

Around the same period, the US began hyping the deployment of the Russian troops and President Biden warned of severe sanctions if Russia invaded Ukraine.

On Thursday, February 24, 2021, President Vladimir Putin launched a military operation in Ukraine, with explosions heard across the country and Russia’s foreign minister warning that a "full-scale invasion" was underway. That brought to an end weeks of fruitless diplomatic efforts by Western leaders to avert war.

The new tension between Russia and Ukraine, which also borders the European Union, has repercussions for the EU, and that is why the EU, most of which countries are NATO signatories, has joined the US in announcing sanctions against Russian entities.

This is not the first time tensions between Russia and Ukraine have reached a boiling point. Russia had invaded Ukraine in 2014 when rebels, backed by President Putin, seized large swathes of eastern Ukraine and have since fought Ukraine's army.