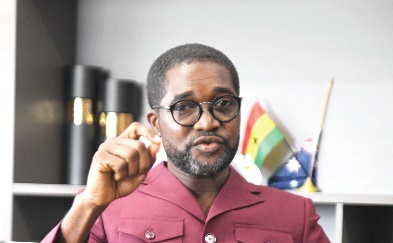 The Minerals Development Fund (MDF) Secretariat has disbursed more than GH¢500 million to beneficiaries of the fund since 2017.

The funds were mainly channelled into development projects in the educational, health, water and sanitation, agricultural and other sectors in mining communities.

The Administrator of the MDF, Dr Norris Hammah, made this known in an interview with the Daily Graphic.

Additionally, he said, part of the funds had been invested in alternative livelihood projects to help curb the illegal mining menace that the country was grappling with.

"The MDF has been instrumental in providing alternative livelihood for mining communities affected by illegal mining. We have so far raised 8 million oil palm seedlings to support the Alternative Livelihood Project (ALP) that was rolled out in 2017 to help curb illegal mining, and over 70 per cent of the seedlings have survived," he said.

Despite those modest gains, he noted that the MDF, which was set up by the Minerals Development Fund Act, 2016 (Act 912) to provide financial resources for the direct benefit of mining communities, institutions responsible for the development of the mining sector, as well as traditional and local government authorities, had teething challenges that had made it difficult consolidate the gains made.

The main source of funds for the MDF is 20 per cent of all mineral royalties paid by mining companies to the state.

The MDF Act provides for other sources of income for the MDF, including grants, donations, returns on investment and gifts approved by Parliament.

However, Dr Hammah said out of all the revenue streams provided under Act 912, the 20 per cent mineral royalties had been the only regular source of inflow into the MDF.

The MDF Administrator also said the Earmarked Funds Capping and Realignment Act, 2017 (Act 947), which capped the only revenue source to the MDF, had drastically reduced the flow of funds and made it more difficult to execute development projects.

"The implementation of Act 947 to cap all statutory funds has affected the MDF. The capping is about 12 per cent, but the calculation is such that every year when they do the deductions, we end up losing almost 50 per cent of our funds.

"The mining communities are not happy because they are of the view that the government is already taking 80 per cent of mineral royalties, so the 20 per cent that belongs to them should be released in full," Dr Hammah said.

Again, he observed that the budget sealing that was given to the MDF by the government caused revenue shortfalls.

Dr Hammah said the government gave a budget sealing for the year, hence if the budget for the MDF was, say, GH¢100,000 and the mining companies produced such that the 20 per cent royalties exceeded that amount, “we will lose out."

Dr Hammah also said as part of measures to rake in more mineral royalties, the government would deploy a multi-stakeholder task force to recover mineral royalties from all defaulting mining companies.

He said the task force would be spearheaded by the MDF Secretariat, in collaboration with the Minerals Commission, the Ghana Revenue Authority (GRA) and the Economic and Organised Crime Office (EOCO).

"Let me set the records straight, that every large-scale mining company in Ghana pays its royalties. The task force that is being formed will be targeting those which deal in lesser minerals such as quarries, sand winning, salt mining, limestone, clay.

"Every building in Ghana was constructed because of quarry products and sand, so it tells you that the operators are in good business. If they pay those minute royalties to the state, it will translate into a big amount to support the country and mining communities; but they do not pay," he said.

Dr Hammah said a proposal on the modalities to recover the mineral royalties had been drafted and would be forwarded to the Minister of Lands and Natural Resources, Mr Samuel Abu Jinapor, for the necessary processes for recovering the royalties to be activated this year.

He observed that given the crucial mandate the MDF had to bring development to mining communities, it was important that all mining companies pay the required royalties to the state to increase inflows to the fund.