VIDEO: What happened when I took my job search to the street - Unemployed graduate speaks Follow @Graphicgh

ASHFOAM Ghana, has supported three institutions as part of efforts to contribute to education in the country.

The gesture is also to help sensitize the youth against social vices that are likely to ruin their future, and thus intensifying the fight against drug abuse and other related crimes.

The beneficiaries included Chosen Rehabilitation Centre (CRC), which supports the rehabilitation of drug addicts, Watch Your Tongue (WYT), an NGO; and The Osu Clottey District Education Language Unit, organizers of a quiz in Accra targeted at encouraging the use of the Ga language among school children.

The move formed part of the company’s corporate social responsibilities.

The donation to the CRC and WYT included mattresses and pillows.

That of the Quiz Competition included school dual desks to be used for the competition; products – students’ mattresses and pillow for the finalist of the competition; mattresses for some of the teacher facilitators, as a form of motivation and an undisclosed amount of money to help organise the quiz competition. 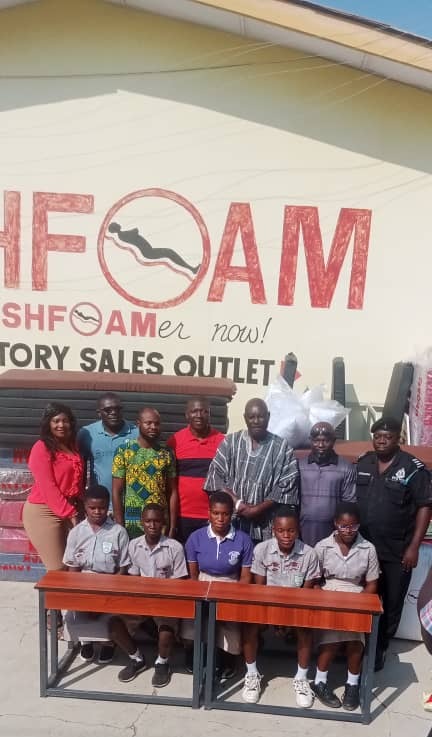 Presenting the items to the beneficiaries, Marketing and Communications Manager, ASHFOAM Ghana Limited, Nana Yaw Ampem-Darko Antwi, stated that his outfit found it very necessary to support individuals and institutions who were contributing towards the development of the country.

He stated that with the support offered to the Ga quiz organizers, the move would go a long way to encourage teachers to develop interest in teaching the Ga dialect as a subject in the basic schools, adding that the quiz would make children develop interest in learning and speaking, not only the Ga language, but all other local languages that goes a long way to strengthen the various Ghanaian cultures and developed the social institutions as well.

“As a company also operating in the Greater Accra metropolis, which is the hometown of the Gas, we find it very necessary to support all activities that seek to promote the Ga culture and also positively affect children, that is why we are not relenting in our efforts to go all out to encourage these pupils and teachers to make this year’s edition of the quiz a success,” he added.

Touching on the need to join in the fight against drug abuse, Mr. Ampem-Darko said it is the responsibility of everyone to help in developing the youth of Ghana; therefore any organization that seeks the interest in identifying addicts within their various communities and lead them to institutions that could offer them help would be worthy to support.

It was for this reason, that ASHFOAM; he said chose NGOs focused on providing support for such individuals, to offer them the items to empower them to accommodate more persons in need of their services.

He advised the youth to desist from abusing drugs and rather engage in activities that would add value to their lives.

Chief of Adabraka, Nii Tetteh Adjabeng II, also known as the Adabraka Atupai Mantse, a member of the Organizing team of the Ga Quiz speaking on behalf of the teachers and participants of the quiz, thanked ASHFOAM Ghana Limited, for the gesture and assured that the support given them would be used for the intended purpose.

In his remarks, founder of WYT, Police Inspector Daniel Ofori Appiah, described the gesture as kind and timely, adding that the mattresses and pillows would be distributed to orphanages and selected Community Health Based Planning Services (CHP) compounds across the country.

He admonished the public “to watch your tongues in everything you do, promote love and desist from encouraging acts that could endanger Ghana’s peace and security.”