Akufo-Addo challenges African leaders to depart from mindset of aid 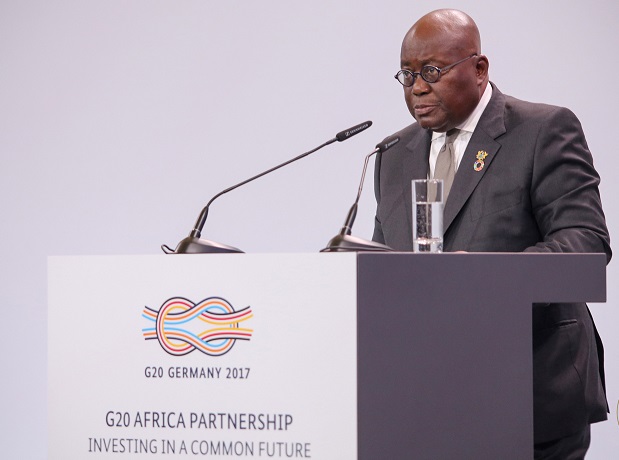 President Nana Addo Dankwa Akufo-Addo has challenged African leaders to depart from the dependency on aid and charity handouts and rather assume responsibility for the transformation of their economies.

“If we, Africans, are to transform our stagnant, jobless economies, built on the export of raw materials and unrefined goods, to value-added economies that provide jobs, build strong middle-class societies and lift the mass of our people out of dire poverty, then we must take our destinies into our own hands and assume responsibility for this,” he said at the G-20 Partnership for Africa Summit in Germany yesterday.

Assuming responsibility, he said, meant that African leaders must, firstly, facilitate the building of a new, sustainable, African civilisation where there was accountable governance, respect for the rule of law, individual liberties and human rights and where the principles of democratic accountability were guaranteed.

President Akufo-Addo stated that the new paradigm required that African leaders “mobilise the immeasurable, vast resources of Africa to resolve Africa’s problems of poverty and development, and free ourselves from a mindset of aid, dependency, charity and handouts”.

The President’s statement comes on the back of staggering research results that show that aid to the continent is a smokescreen to loot from the continent.

According to the Guardian newspaper of the United Kingdom, although sub-Saharan Africa received $134 billion each year in loans, foreign investment and development aid, research by a group of UK and Africa-based NGOs suggested that $192 billion left the continent, leaving a $58 billion shortfall.

The report said while Western countries sent about $30 billion in development aid to Africa every year, more than six times that amount left the continent, "mainly to the same countries providing that aid".

The study, which also noted that African governments spent $21 billion a year on debt repayment, called for the aid system to be overhauled and made more open.

With those figures probably in mind, the President urged his peers on the continent to initiate and implement policies that would encourage and empower the private sector to grow their respective economies within frameworks of macroeconomic stability.

“When the private sector flourishes and when our enterprises become competitive, not just on the continent but also in the global marketplace, then can we create the thousands and thousands of jobs our teeming masses of unemployed youth crave.

President Akufo-Addo was unequivocal in his view that Africa had the resources and means, material and human, with women and youth at the forefront, to transform the structures of its economies and be part of the international division of labour at the high end of the value.

The process of economic and industrial transformation, he stressed, had to go along with ensuring that the most basic elements of social justice were met — making quality basic education and health care accessible to all to promote a culture of incentives and opportunities.

President Akufo-Addo noted that the reforms being undertaken in Ghana, in the management of the economy and in the governance structure, should entitle it to be a suitable candidate for inclusion in the investment compacts that were the substantive outcomes of the G-20 Africa Partnership Summit conference.

He said the investment compacts would enable us to “maximise our possibilities of economic growth to deal with the huge problem of unemployment, the major social issue of our time in Africa”, stating: “Young people, busy with their lives and earning a living, would hardly be tools for wreaking havoc on society.”

Making reference to the harrowing risks undertaken by youth traversing the Mediterranean in search of greener pastures, the President was confident that “if we provide them the right environment in Africa, which enables them to enhance their skills, receive appropriate vocational training and have access to digital technology, they will make our continent great. If these youth are allowed to realise their full potential, Africa could see huge economic gains in the shortest possible time”.

He was hopeful that the conference would lead to the rapid development of the African continent, as well as address the many constraints to Africa’s development, domestic and external, including the vast amounts of illicit flow of capital out of the continent.