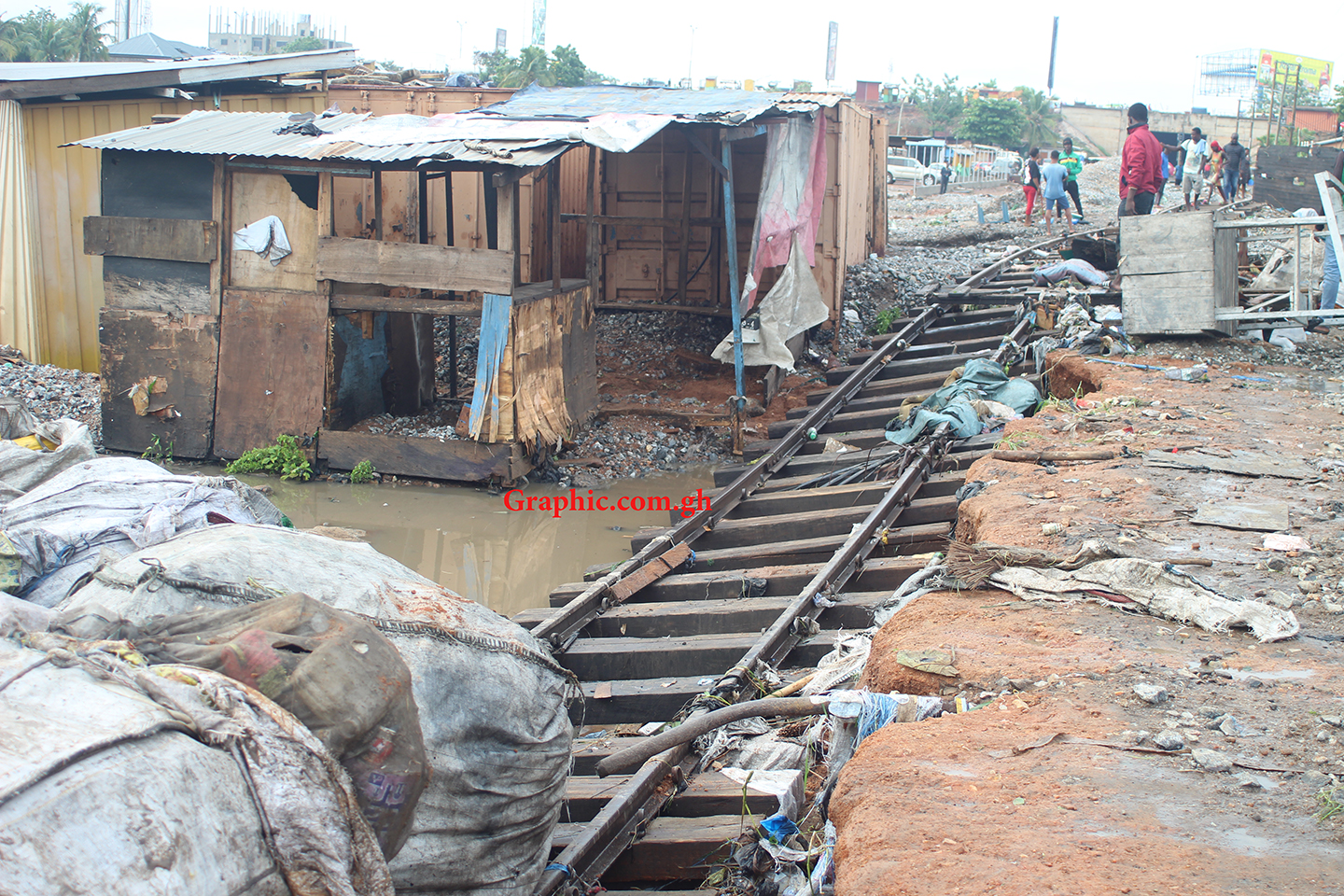 Five persons have been confirmed dead in the floods that followed torrential rains in parts of Accra in the early hours of Tuesday.

The rains, which started about 1 a.m., left some places flooded, displacing families and destroying properties.

Those who lost their lives include Dominic Abikwoa, 31; Diana Ayivi, 24; Christabel Ayisibea, 17, and Kojo Antwi, aka Apea, a mechanic.

They all died in parts of Accra.

Antwi is said to have died from electrocution following the heavy rains.

Eyewitnesses said he had attempted to safeguard his belongings, which were being submerged in the floods.

The body of a boy of about two years was also found near a gutter opposite the railway line at the Achimota Charcoal Station.

It is believed to have been swept away by floods from Apenkwa.

The most affected areas were Odawna, Alajo, the western part of the Graphic Road, Kaneshie, the Mallam Junction and Achimota.

Many of the car dealership showrooms on the Graphic Road, including Rana Motors and Toyota Company Ltd, were flooded.

The Ring Road East, between the Ako Adjei Interchange underpass and the Danquah Circle, overflowed with rain water, leaving heaps of sand on the road and its shoulders after the rains.

The situation caused a lot of traffic in parts of the capital, including Kaneshie and Mallam Junction to the Obetsebi-Lamptey Circle, as monitored by our reporters Emelia Ennin Abbey, Kester Aburam Korankye, Juliet Akyaa Safo & Joshua Bediako Koomson.

A portion of the Tudu-Nsawam railway line located around Achimota was completely destroyed when the flood waters swept away the chippings, sleepers and other components of the line during the rains.

From Kumasi, Emmanuel Baah reports that some three hours of rains yesterday afternoon resulted in rubbish being strewn on open spaces in the city.

The Susan River, which runs through many parts of the city, burst its banks, resulting in large amounts of waste, including plastic and empty bottles, being scattered about.

There were no casualties and no property was destroyed.

The Korle Klottey Municipal Director of NADMO, Mr Daniel Odei-Appiah, who was at Odawna, together with officials from the assembly, told the Daily Graphic that a team of soldiers from the 48 Engineers Regiment of the Ghana Armed Forces and the police were immediately called to the scene.

“Unfortunately, a life was claimed as a result of electrocution. The place was flooded, and in his attempt to save his belongings, he got electrocuted,” he said.

He advised the public to desist from getting into flood waters to remove items to avoid such casualties.

He said the assembly was working hard to complete the construction of storm drains within the municipality.

The Municipal Chief Executive (MCE), Mr Samuel Nii Adjei Tawiah, also led a team of officials to assess the situation in areas such as Tsono Tsatsu in the Osu Doku Electoral Area, Asylum Down and areas close to the Iran Clinic, which were also affected by the floods.

Residents were seen busily scooping water out of their homes and rooms, while the streets were littered with debris.

The MCE gave an assurance that the assembly would intensify its enforcement of sanitation bye-laws and continue de-silting drains within the municipality.

He advised the public to desist from bad sanitation practices, such as dumping refuse into drains, as well as blocking water-courses.

On the Graphic Road, where some showrooms, workshops and some offices of automobile companies were submerged in the floods, a perennial occurrence, some workers were seen collecting some valuables from the flooded offices and sending them to other offices which were not affected.

Some displaced residents of Achimota told the Daily Graphic that the flood waters entered their homes when the rains started around 1 a.m.

“I was very tired from work and I was relaxing when the rains started, but just then we realised that it was entering the room. It didn’t rain for long before the flood started,” Mr Nicholas Attiah, who lives close to the Achimota Overhead Bridge, said.

Recounting his ordeal, he said he lost many belongings which were swept away by the flood waters.

As a result, he said, he had to send his wife and his two children to live with his elder brother at Odorkor, another suburb of Accra.

Aside from the damage caused to properties which had rendered hundreds of people homeless, three persons were said to have died as a result of the floods at settlements along the Achimota-Nsawam railway line.

An opinion leader at Alogboshie, Achimota, Nana Abanga, said he had seen the bodies of Ayivi and Ayisibea who drowned in the flood waters, saying they had been taken to the mortuary.

In a separate interview, some squatters who live in makeshift homes along the railway line said they had lost almost all their belongings, including fridges, television sets and clothes, to the flood.

An elderly man, who identified himself as Black Panther, said a young man had died during the night after he was electrocuted, while rescue efforts were ongoing to salvage items.

The Member of Parliament for Okaikwei North, Mr Fuseini Issah, in an interview with the Daily Graphic, said: “It has been devastating and we have recorded some fatalities. As of now, I am unable to give the exact number of casualties, but we have been up since 1 a.m.”

He said almost all the communities in the constituency had recorded some form of devastation from the rains and floods.

“Everywhere in the constituency, right from Anahoma through Akweteman to Abofu, has been hit. Some high-tension cables have fallen and it’s been awful this morning,” Mr Issah said.

“My first port of call for support is NADMO, so I called the regional head and already there are some of his people in various parts of the constituency, making their own assessment,” he said.

Mr Issah, who was visibly shaken by the amount of devastation caused by the floods, said there was the need for a lasting solution to the perennial flooding in parts of the constituency.

“There is a longer term effect on some of these things because if you look around, there are lots of illegal structures springing up all over the place, but when the authorities come to get rid of them, they also have to put a human face to it. So when some of these things happen, then it’s a matter of balancing it nicely, so that people will have a place to live, especially during this period of the COVID-19 pandemic,” he said.