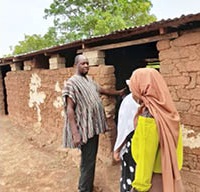 Gamze Ozcelik (right) and an official of the Islamic Education Unit at the ceremony
30.5k Shares

A school complex valued at GH¢1.2 million for the people of Kadoli in the Wa Municipality of the Upper West Region has been inaugurated.

The 12-block school complex and other facilities were constructed by the West African Humanitarian Aid (WAHA), a Turkish NGO focused on human development activities to replace a ramshackle school block which has discouraged students and teachers from using it.

The project, from Kindergarten to junior high school (JHS), was completed with three offices for administrative staff, library, staff common room, washrooms and storerooms. It was also connected with potable water, electricity and furnished with good lighting system and ceiling fans in all the rooms.

Officials of the WAHA used the occasion to perform a sod-cutting ceremony for the construction of a mosque in Wa.

The Regional Islamic Education Unit appealed to the NGO to provide the community of Kadoli with an educational facility to replace the dilapidated one they had been using.

As a matter of fact, the last batch of three students from the school, who sat the 2020 Basic Education Certificate Exams (BECE), all failed. They were the remaining of 17 students who had begun from JHS One.

The WAHA has, over the years, been supporting beneficiaries with services in sectors such as health, education, water and food items to the people in the region, which was what led to the appeal to them by the Regional Islamic Education Unit. 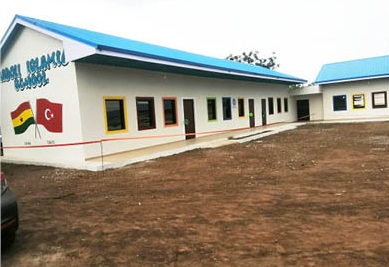 At the inauguration ceremony, six former female students of the school, who had dropped out on seeing the new school complex, offered themselves to be enrolled back to the school.

The General Manager of the Islamic Education Unit, Bapuni Abdul-Karim, said he was happy to have been of assistance to the community of Kadoli to ensure that their children attained education under befitting conditions as obtained in other parts of the country.

He commended the WAHA and appealed to benevolent organisations to come to the aid of other schools, which were also studying in dilapidated structures.

Alhaji Abdul-Karim advised the children to respect their parents, saying, “if you do this, your parents would be happy to look after you and leave their property in your care should anything happen.”

The chairperson of WAHA, Gamze Ozcelik, promised to strengthen supervision and monitoring in the school.

She was of the view that the supervision would be strengthened by qualified staff who would undergo regular refresher courses and also introduce competitions such as reading exercises and essays.

The Assembly Member for Charingu Electoral Area, Fuseini Issahaku, said at long last their greatest challenge of school drop-outs had been solved with the provision of the new school complex.