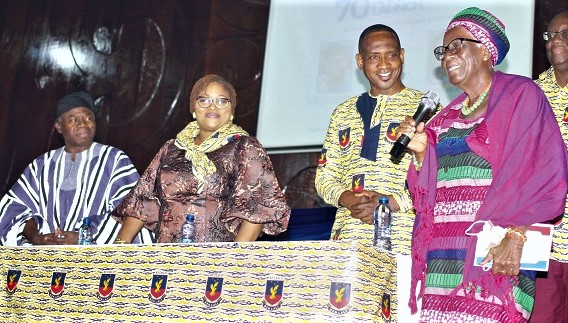 Keta Senior High Technical School (KETASCO) has launched its 70th anniversary, with a call on all past students to come together and contribute to the infrastructural development of the school.

The President of the old students association of KETASCO, Kojo Mattah, said the anniversary had a lot of activities planned up to April 2023, for which old students would be expected to contribute “at least GH¢1000” each to support infrastructural development.

The launch was done at the R.S. Amegashie Hall of the University of Ghana Business School, Legon, last Saturday on the theme: “KETASCO at 70: Retrospect and Prospect”.

Mr Mattah said the association had launched a project called the Nexus Project, which was expected to generate about GH¢3 million in the next five years to cater for some structural developments in the school.

“If we can get all past students to contribute at least GH¢1,000 each, I know we can even exceed our target and contribute to restoring the image and the brand of KETASCO," he said.

He added that some blocks, such as the dining hall, needed expansion, while some junior and senior classroom blocks needed to be renovated.

“We know that the government cannot do it alone and so we are calling on every past student to rally behind the Dzolali Flag and Eagle, so that we can lift the image of the school," he said.

Speaking on the theme, the guest speaker, a former Chief Executive Officer (CEO) of Stanbic Bank and Chief of Pishigu, Naa (Dr) Alhassan Andani, touched on some topics such as private sector financing, curriculum development, networking, technology, teaching and mentoring.

He advised past students of schools to spearhead and partake in conversations that lingered on those aspects to ensure better education in the country.

While the government was doing its part, he noted, all old students must come together to fill the gap of private sector financing to make Project Nexus a reality.

On curriculum, Dr Andani urged the old students to join in the conversation to change the existing curriculum that only allowed students to become public servants, while only a few ventured into entrepreneurship.

He opined that the current curriculum did not allow students to be world changers, since it was the old system inherited from the colonial masters a long time ago.

He commended the old students for keeping a healthy network which had made it easy for them to bring everyone on board.

He further encouraged the old students to support teachers to improve on their living conditions and also join policy makers to enhance technology education to meet the changing world.

Dr Andani underscored the need for all old students to serve as mentors and coaches to current students by sharing their experiences with them.

“We should not only use Project Nexus to raise money; we must also use it as a platform to put ourselves out as specialists to effect change," he said.

The CEO of the FC Group Ltd, Dr Grace Amey-Obeng, who chaired the launch, entreated the old students to always remember their alma mater and contribute towards its development.

“I encourage you all to keep supporting your alma mata to realise its infrastructural development agenda,” she said.