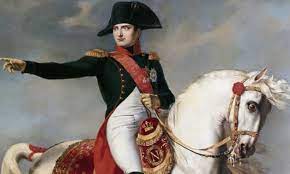 Few men in history have had as great an influence on the world and the times in which they lived as Napoleon Bonaparte.

When he was a boy, he identified himself with the great heroes of ancient history whom he read about. He was barely sixteen years old when he graduated from the military academy in Paris.
When he was just twenty-four years old, he was promoted to brigadier general for helping recapture the city of Toulon from the British.

Later, he led armies to victory over Austria, and won a war in Egypt.

Napoleon became the first consul, the ruler of France. He reformed the whole structure of government.
In 1804, Napoleon was proclaimed emperor of France.

During the ten years of the French Empire under Napoleon, there was almost continuous war, but his victories enabled him to dominate Europe from Spain to the borders of Russia.
In 1812 he decided to invade Russia with an army of more than six hundred thousand men.

Even though he captured Moscow, his army didn't have enough supplies, so had to retreat. Only about one hundred thousand men survived the march home.
After several other defeats, Napoleon abdicated and was sent into exile on the island of Elba. He escaped from Elba and gathered a new army, but he was defeated in 1815 at Waterloo by an army commanded by Wellington and Blücher.
Napoleon surrendered to the British, who sent him as a prisoner to the barren island of St. Helena.

There he remained until his death on May 5, 1821. While he led France to new greatness and power, it can also be said he caused great suffering and ruined the lives of whole nations of people.

Source: More Tell me Why