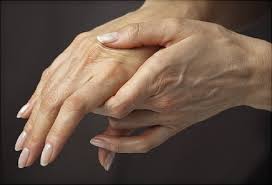 The word arthritis is used to describe a great variety of diseases, all of which affect adversely the joints of the body.

The two most common types of arthritis are degenerative arthritis and rheumatoid arthritis.

It is a disease of advancing years, and usually begins after forty. The cartilage of the bones becomes worn away and broken, so that surfaces of the bone come in direct contact with each other. This is because cartilage acts as a sort of shock absorber of the joints.
The symptoms are either stiffness or pain when there is movement. Knobs begin to appear at the end joints of the first and second fingers. There is also usually pain and stiffness of the knee.
Rheumatoid arthritis is popularly known as rheumatism. What happens here is that the joints become inflamed.

The membrane that lines the joint becomes enlarged, and this eats into the cartilage underneath.
At the same time, the bone below the cartilage begins to change.
It loses its mineral substances, and the joint becomes stiff . In time, this can end in loss of motion altogether in the joint, so that the person becomes crippled.
What brings on this type of arthritis is still not fully understood by medical science. There are many theories about it, and one is that it is caused by infection.

Victims of arthritis have long been hoping for some cure or magic "pill" that would end their suffering. But none has yet been found. Medical authorities want people to realize that the cause of this arthritis is still unknown, and that even some of the drugs that seem to help only give relief while the drugs are being used.

When they are stopped, the symptoms return. And the damaged tissue is not repaired.

Source: A book titled More Tell me Why