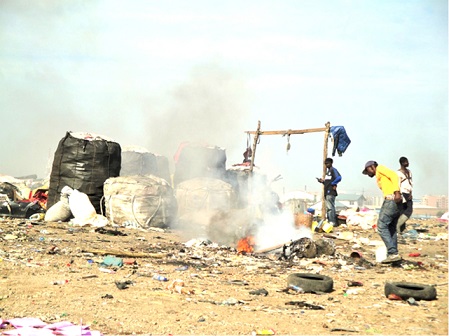 Inhaling the smoke from rubbish burning is not healthy.

Dear Editor, I wish to express concern about air pollution in the country, chief among them being bush burning.

Residents of some new settlements which do not have refuse trucks that go round to collect their refuse end up burning their refuse.

Besides these people, others burn rubbish just anywhere including public places. Inhaling the smoke from such burning activities is not healthy and for those who have respiratory problems such as asthma, inhaling the fumes easily spark off attacks.

Some of us also end up with catarrh after inhaling those fumes. Besides these is the fact that if you are dressed for school or to any place and pass by the smoke, one smells heavily of it.

Besides the health issues bush burning poses, it also destroys the environment. As such, some insects die while plants and other vegetation around those areas also die in the process.

In the end, the land is left bare and so flooding could occur easily when there is heavy rain.

The big industries and vehicles on our roads are also not helping matters because they release so much dangerous fumes into the air. Air pollution can cause global warming which affects the climate.

Today, the world is faced with climate change issues and that is why recently world leaders have been putting in efforts to address the issues; they even recently met to find solutions to the problem.

Let’s come together to find a solution to the climate change situation and this can start with us.