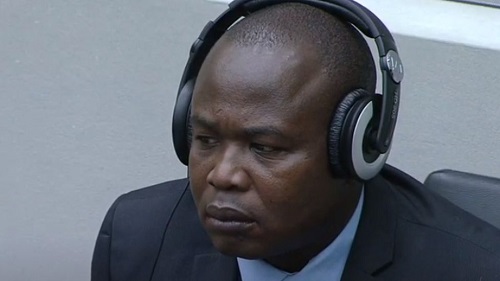 Known as the "White Ant", convicted war criminal Dominic Ongwen is estimated to have been between nine and 14 years old when he was abducted by the Lord's Resistance Army (LRA) as he was walking to school in northern Uganda - going on over the next 27 years to become a ruthless rebel commander.

Warning: Some people may find details in this story upsetting

"It is a story of a child, like many in the LRA, forced to grow up in the image of their oppressors," campaign group LRA Crisis Tracker says.

Shortly after his abduction in 1987 or 1988, he tried to escape with three others and when they failed, he was forced to skin alive one of the other abductees as a warning, a psychiatrist at his war crimes trial at the International Criminal Court (ICC) in The Hague said.

"They skinned this person, removed his gut, and put it up on trees," Dickens Akena told the court. "And he [Ongwen] said he wouldn't eat meat for two to three months."

Ongwen - whose surname means "born at the time of the white ant" - went on to rise rapidly in rebel ranks, becoming a brigadier by his late 20s after winning the confidence of LRA leader Joseph Kony, LRA Crisis Tracker says.

But he had a fractious relationship with the LRA warlord, managing to escape his clutches in 2015 when he surrendered - 10 years after he, Mr Kony and three other senior commanders had been indicted by the ICC.

He has now been found guilty of 61 of the 70 counts of war crimes and crimes against humanity committed between July 2002 and December 2005.

They relate to attacks on four camps, guarded by the security forces, set up for those forced to flee their homes because of rebel raids. He was also convicted of charges relating to sexual slavery and conscripting and using children under the age of 15 in hostilities.

Claiming to fight for a biblical state, the LRA has killed more than 100,000 people and kidnapped more than 60,000 children during the three-decade long conflict which spread to several of Uganda's neighbours.

Ongwen, who had pleaded not guilty, said he should have been regarded as a victim too, telling the court: "I'm one of the people against whom the LRA committed atrocities."

Described as a quiet and playful child, his uncle, Johnson Odong, a court witness, said Ongwen's parents were both dead within a month of his abduction - his mother allegedly bludgeoned by the rebels and his father mistaken for a rebel by the security forces.

Primary school teacher P'Atwoga Okello said in a defence witness statement that the boy enjoyed cultural dance classes "and other areas of the arts".

His teacher in the LRA was Vincent Otti, who went on to become Mr Kony's deputy, with whom he lived after his abduction, according to academic Erin K Baines.

In the mid-1990s he moved to what is now South Sudan from where the LRA conducted operations.

By 2001 he was a field commander and he became known for replenishing forces through abduction raids in Uganda, Ms Baines says.

"[He] earned the reputation of being able to emerge from the bloodiest of battles with few casualties among his fighters," the Enough Project, another campaign group, says.

An LRA escapee alleged that Mr Kony ordered that Ongwen be severely beaten for insubordination at the end of 2014.

In bad shape he eventually escaped from the LRA camp in Darfur, making it from Sudan to neighbouring Central African Republic (CAR), where he was taken into custody.

At the time he asked for forgiveness from the Ugandan people, but within 10 days he had been transferred to the ICC.