Hong Kong: Children to be taught about national security law 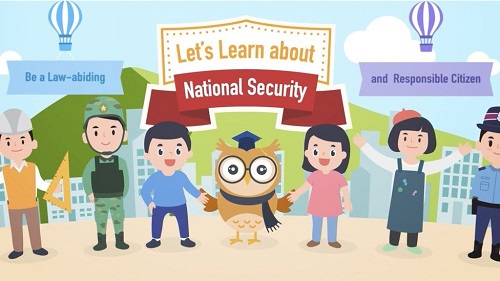 Children as young as six are to learn about crimes under Hong Kong's national security law.

Schools will be asked to monitor children's behaviour and report any support for the pro-democracy movement, as part of new education rules.

The national security law was imposed last June with Beijing arguing it was needed to tackle unrest linked to pro-democracy protests in the city.

Thousands of children became involved in the protests.

Hong Kong's education bureau released the guidelines late on Thursday along with an animated video that explains to students what the national security law is.

The law criminalises secession, subversion and collusion with foreign forces with the maximum sentence life in prison.

The video, featuring an owl and two students, explains that the national security law has been enacted "for the sake of Hong Kong's continuous development and long-term prosperity".

"We all know Hong Kong is an inalienable part of our country," it tells students.

Primary school students will also be taught how to sing and respect the national anthem and learn about how the People's Liberation Army protects Hong Kong. Older students will learn about the limits of Hong Kong's rights and freedoms.

The national security law will also be incorporated into other subjects such as geography and biology.

Schools are required to stop students and teachers from singing specific songs - a nod to a trend in schools last year where children would drown out the Chinese national anthem with protest songs.

Any books that endanger national security will be removed from schools' libraries.

The new guidelines have been criticised by Tin Fong-Chak, vice-president of the Hong Kong Professional Teachers Union.

Mr Tin told the Financial Times newspaper that the guidelines were "extremely meticulous".

"The government basically does not trust schools. These measures will destroy the teacher-student relationship," he said.

Hong Kong has had a high degree of autonomy since it was returned from British to Chinese rule in 1997, and its residents have had a far higher level of freedom of speech and media than people on the mainland.

But the new law's key provisions include that crimes of secession, subversion, terrorism and collusion with foreign forces are punishable by a maximum sentence of life in prison.

It makes it easier to punish protesters, and reduces Hong Kong's autonomy.

The law also gives Beijing powers to shape life in the former British colony in a way it never has before.

Critics say it effectively curtails protest and freedom of speech. China has said the new law will return stability to the territory after a year of unrest.